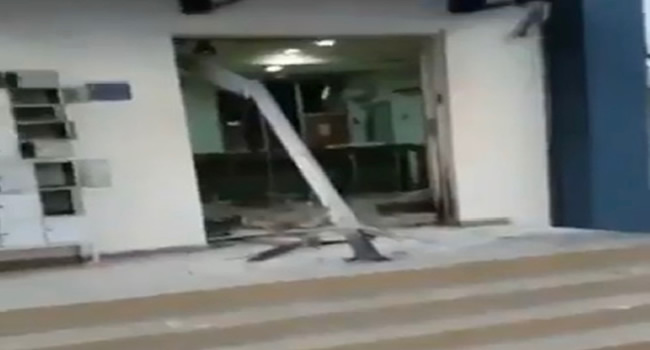 An attempt to rob two commercial banks in Apomu and Ikire areas of Osun State on Wednesday, has left four policemen, and at least three civilians dead.

The Osun State Police Command confirmed the incident in a statement by the command’s spokesperson, Yemisi Opalola, sating the suspected armed robbers numbering about 35 at about 6.10 pm on Wednesday, attacked two commercial banks in Ikire and Apomu.

According to Opalola, the robbers were, repelled by a combined force of police operatives and local security outfits and were forced to flee to the bush.

She said the robbers came shooting sporadically after the police operatives and local security groups engaged them in a gun duel, leading to the death of three residents.

The statement read, “The armed robbers numbering about 35 came in about five vehicles simultaneously attacked Ikire Divisional Police HQ and the Armoured Personnel Carrier (APC) pinned down at Ikoyi-Osun with several explosive devices and several gun firing in a bid to subdue the capacity of the Police while attempting to rob First Bank Ikire and Access Bank Apomu respectively.

“On sighting the overwhelming Policemen comprising Prompt Response Unit (PRU), CP’s Surveillance team, IRT Operatives, STS, 39 PMF, JTF, along with the local security outfits, who swiftly engaged them in a fierce gun duel, the robbers began to flee. While escaping, they shot sporadically, and regrettably, three civilians were shot namely Toheeb Oyebola, Temilorun Adebiyi, and one other, (whose identity is not yet known), all-male.

“They did not succeed in robbing any of the banks. The assailants fled to the bush with gunshot wounds, abandoning two of the operational vehicles they came with.”

Opalola said the remains of the victims had been deposited at Oluyoro Catholic Hospital morgue, Apomu, adding that effort is ongoing to apprehend the fleeing robbers.