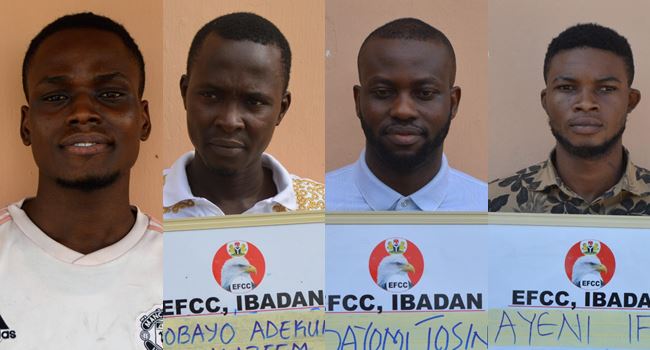 Four young Nigerian have been sent to jail in Ogun State over internet fraud.

Three of them, Tosin Simeon Abayomi, Ifedapo Ayeni and Daniel Nnorom, were sent to jail by Justice Ibrahim Watilat of the Federal High Court sitting in Abeokuta, Ogun State, on Wednesday, June 3.

They were jailed for criminal impersonation and possession of documents containing false pretence.

The trio were found guilty of lone charge filed against them by the Economic and Financial Crimes Commission (EFCC), Ibadan zonal office.

They were awarded two months custodial sentence each.

While Abayomi and Ayeni were found guilty of criminal impersonation, Nnorom was convicted for being in possession of documents containing false pretences.

They had earlier pleaded guilty to the charges when read to them.

After pleading guilty to the charges, prosecution counsel, Oluwatoyin Owodunni prayed the court to convict them accordingly, hence their eventual conviction.

Justice Watilat also ordered Nnorom to restitute the sum of $830, as well as forfeit his Toyota Corolla car, one blue colour Nokia phone and black colour Iphone XX max to the Federal Government of Nigeria

Abayomi forfeited his Lexus RX 350 car and one Samsung Galaxy S9 to the government, and also restituted the sum of $100 to his victim.

Ayeni was also ordered to restitute N78,792 to his victim.

He was sentenced to six months imprisonment and ordered to restitute the total sum of $2,390 and forfeit his Iphone 6 to the government.