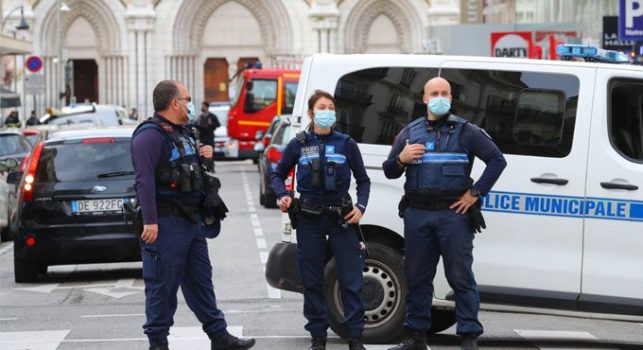 A tragic scene played out on Thursday in the French city of Nice when a knifeman killed at least three people and wounded several others at a church in an incident the city’s mayor described as an act of “terrorism”.

Moments after the attack, Mayor Christian Estrosi said on Twitter that the attacker had been detained. French media said the suspect was in hospital.

Estrosi said one of the victims was killed in “horrible” way, “like the professor” – an apparent reference to the attack on French teacher Samuel Paty, who was beheaded in broad daylight earlier this month.

READ ALSO: France cautions its citizens in Muslim countries to watch out for backlash

French Prime Minister Jean Castex revealed that the incident forced French authorities to raise the security alert in the country to the highest level, minutes after the knife attack in the city of Nice.

This came after French authorities told its citizens living or visiting several Muslim-majority countries to take extra security precautions because of a surge of anger over caricatures of the Prophet Muhammad displayed in a French school.

French officials have said they will; “continue to support the right to show the caricatures after an 18-year-old student of Chechen origin killed Samuel Paty, a teacher who showed the images to his pupils as part of a civics lesson.”

We must avoid second wave of COVID-19, our economy too fragile for another lockdown —Buhari