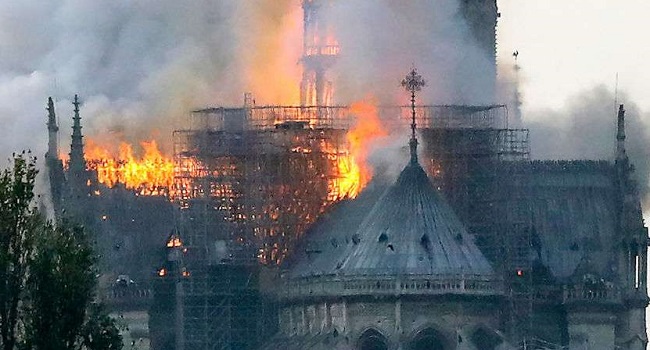 President Emmanuel Macron has vowed to rebuild the historic Notre Dame Cathedral for the people of France, after they and the world watched in shock when the cathedral burned Monday.

The fire broke out Monday evening and erupted for hours before 400 firefighters, working with precision to avoid further damage to the medieval landmark, managed to bring it under control.

It was learnt that they were unable to save the spire that was restored in the 19th century which burned before finally crumbling as thousands of Parisians who had gathered in the streets watched in horror. Most of the roof was also destroyed.

Read also: Consumer group warns that UK could be flooded with unsafe products after Brexit

Speaking from the scene of the fire in the French capital Paris, Macron described the fire at the 850-year-old Gothic work of art as a terrible tragedy, but added the worst had been avoided.

“I’m telling you all tonight — we will rebuild this cathedral together. This is probably part of the French destiny,” he said.

“Starting tomorrow, a national donation scheme will be started that will extend beyond our borders.

“Notre Dame is our history, it’s our literature, it’s our imagery. It’s the place where we live our greatest moments, from wars to pandemics to liberations,” Macron said.

Russia imprisons Norwegian for spying on its submarines