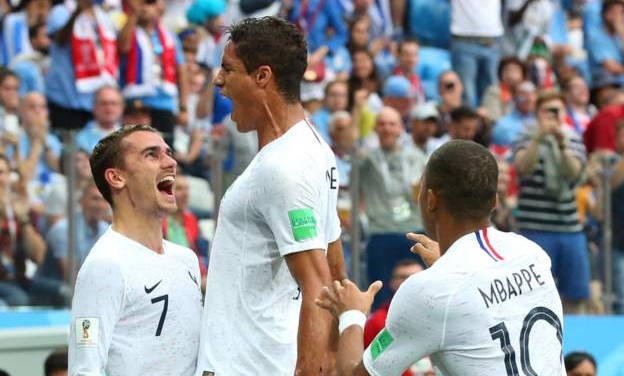 France sealed their place in the semifinal of the 2018 FIFA World Cup after defeating Uruguay 2-0 in their quarterfinal clash in Russia on Friday.

With one of the best striking forces at the Russia showpiece, Uruguay have scored in all previous games but failed to find the back of the net at the Nizhny Novgorod Stadium as Luis Suarez played without injured partner, Edinson Cavani.

The game was decided when Atletico Madrid’s Antoine Griezmann scored his third goal of the tournament with a blazing shot that was ill-handled by goalkeeper Fernando Muslera.

His goal came on the hour mark to seal the win for the Les Blues, who were already ahead near the close of the first half when Raphaël Varane headed in from a freekick.

The South Americans had the opportunity to equalize before the break from a free-kick of their own, but Hugo Lloris produced a brilliant diving stop to deny Martin Caceres, before Diego Godin blasted the rebound over.

And that terrible mistake of Muslera in the second half ended all hopes of his side getting back into the game, as France progressed.

It will be the sixth World Cup semi final for France, and they will take on either Brazil or Belgium at the Saints Petersburg Stadium in Russia.

Out of the five previous times they reached the last four, France had progressed to the final twice (in 1998 and in 2006).

‘Love for country’ – why Jordan Nwora chose D’Tigers over USA