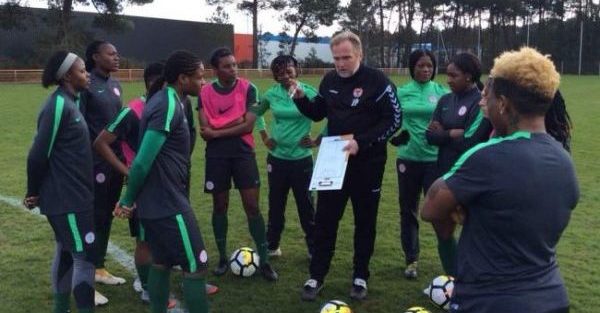 Nigeria’s senior women team, the Super Falcons, were thrashed eight goals to nothing by their French counterparts in an international friendly in Le Mans, France on Friday night.

Top striker and reigning African women’s footballer of the year, Asisat Oshoala, who was not called up for the game took to Twitter after the heavy defeat to say the team needs consistency.

“A fit and consistent Super Falcons would definitely put up a better fight….Chin Up! Time to work 🇳🇬💪🏾 #SuperFalcons #AfterAlmostTwoYearsOff,” she tweeted early on Saturday.

The game played inside the MMArena in Le Mans was the first for the Nigerian ladies since their triumph at the 2016 Africa Women Cup of Nations in Cameroon.

The hosts got in front 19 minutes into the game through Eugienie Le Sommer, and tripled their lead before half time as goals by Valerie Gauvin and Gaetane Thiney made the scores 3-0.

After the break, Nigeria had a chance to pull one back when Desire Oparanozie struck a shot at goal but was denied by the opponents’ goalkeeper.

But Aminata Diallo added France’s fourth on the hour mark, before Gauvin scored her second of the night to put the 2019 FIFA World Cup hosts 5-0 up.

Gauvin later completed her hat-trick which was followed by an own goal by Nigeria’s Faith Ikidi and a stoppage-time finishing by Marie-Charlotte Leger as the game ended 8-0.

For the Thomas Dennerby’s side, the friendly serves as part of preparations ahead of the 2018 Africa Women’s Cup of Nations qualifiers.