Home » Politics » FRANK TO OSINBAJO: Seek forgiveness from Nigerians and God, or else… 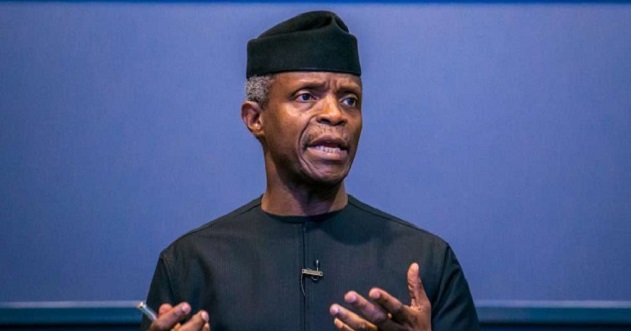 Vice President Yemi Osinbajo has been asked to pray to Nigerians and God to forgive him, for allegedly deceiving citizens with N10,000 Tradermoni before the last general elections.

According to the political activist, Osinbajo has to beg for forgiveness from Nigerians and God to avoid more disgraces.

The Nigerian Vice President has continued to receive knocks and criticisms from a good number of Nigerians after President Muhammadu Buhari on Monday set up an economic advisory council to replace the current economic management team headed by Osinbajo.

Buhari had further instructed Osinbajo to seek approvals on anything relating to agencies under his supervision, henceforth.

In a statement on Thursday, in response to the development, Frank lambasted Osinbajo, a Redeemed Christian Church of God (RCCG) pastor. He accused him of yielding himself to be used by the Buhari government to allegedly deceive Nigerians.

He regretted how Osinbajo, recently in faraway New York, “lied to the world that the reported cases of kidnapping in Nigeria were being exaggerated.”

The Bayelsa State-born activist went further to say that nemesis had caught up with the vice president.

“It is said that when you eat with the devil, use a long spoon, Osinbajo has been eating with the devil with his bare hands and that is why he can’t say anything to defend the masses.

“He was used to committing electoral fraud through Trader Moni, now that his services are no longer needed, he has been made irrelevant.

“For Osinbajo, it is okay for Nigerians to suffer and wallow in penury so long as he is allowed to eat with the devil. He has been rewarded for his hard work of Trader Moni by being dumped and made irrelevant,” he said.

He also said that Osinbajo kept “wicked silence when APC government abused Nigerians through wrong and clueless policies, police and military brutality that has put over 70 per cent of Nigerians in poverty and sent some more to their early grave.”

He added, “Christians are being slaughtered by the Fulani herdsmen, yet, it does not bother Pastor Osinbajo. He did not issue a statement or sympathised with Christians community, not even the late redeemed female pastor that was beheaded in Abuja but now the table has turned, let him enjoy his meal with the devil.

“He should beg Nigerians and God for forgiveness otherwise more disgrace awaits him, the evil that men do, live with them.

“Osinbajo should bear his cross in silence and the cabal should also take note that every day is for the thief but one day is for the owner. Today it is Osinbajo, tomorrow maybe their turn as God will weed out the evil and corrupt government very soon.”