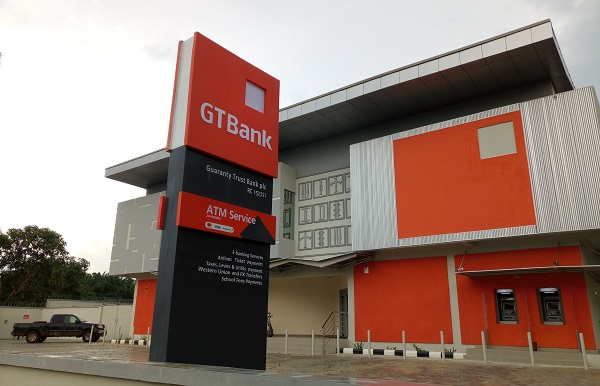 Guaranty Trust Bank (GTBank) seems to have become the go-to financial institution for fraudsters, as they target account holders in the bank led by Miriam Olusanya, the managing director.

Customers of GTBank, which is a subsidiary of Guaranty Trust Holding Company (GTCO) say they have been experiencing fraudulent and suspicious deductions from their accounts, which happens mostly during Fridays and weekends.

Such a situation was experienced by paint manufacturer and housing exterior decorator, Oyeyemi Oluwatobi, whose account with GTBank was allegedly hacked, as a suspected fraudster withdrew about N700,000 from his account.

It was gathered that his account was first debited of N450,000 and transferred to one Ojo Jeremiah account held in Sparkle Bank, while N249,900 was transferred to a Sporty Internet Limited account within minutes on Saturday afternoon, January 22, 2022.

Over eight months after the alleged fraud occurred on Oyeyemi’s account, he is yet to recover his funds, as GTBank has failed to resolve the situation within the 60 days period stipulated by the CBN in its December 20, 2019 circular.

“I went to the bank to lodge complain and I was told the money was moved to SPARKLE BANK with account name; OJO JEREMIAH and after asking what is the way forward the branch manager adviced me to go get a police officer and go to the other bank to lay complain.” Oyeyemi told Ripples Nigeria.

His situation is one of many, as 15,024 suspected fraudulent cases were recorded in GTBank in 2021, with over N1.21 million customers’ funds affected, against the N1.35 million involved in 17,310 cases reported in 2020, according to the lender’s financial statement submitted to the authorities.

While the figures seem to be declining, the actual/expected loss is rising, with some customers losing N511,962 last year, surpassing the N174,402 loss recorded in 2020.

This means in one month, Oyeyemi has lost more than the whole amount GTBank reported that its customers lost in 2021. However, he’s not alone in this situation, as other GTBank account holders have also been victims to fraudsters who have seen GTBank accounts as easy target.

Ripples Nigeria noticed that the fraudulent or unauthorised deductions from GTBank customer accounts occurs on Friday or weekends, making it difficult for the victims to seek redress immediately at the lender’s closest branch until Monday – giving the fraudsters two days window to disappear with the funds.

A Twitter user, identified as Simpleppearls, had publicly accused GTBank of a fraudulent debit that occurred on her accounts on Friday, April 1, 2022, same day she received her salary.

It was gathered that within five minutes after her salary was paid, “#102,800 was removed from my account to an account of Ibukun Ademola.” Pearl explained further that all she was hearing when GTBank customer care was called was music.

“A transaction i did not initiate. How do I pay my bills and also survive. Am so devastated right now, how do I survive with a child, how do I attend to people am owing that I have promised I will pay them by month end. How do I survive this.” she lamented at the time, adding that GTBank sent her a mail, reportedly informing Pearl there’s “nothing they can do” she disclosed on her Twitter page.

Read also:EFCC detains Innoson counsel for 7 hours over alleged use of false information against GTBank

Six months ago, GTBank was accused of shielding one of its employees who allegedly stole about N600,000 from a Lagos-based trader, Ngozi Njoku, after helping her with her bank app in the firm’s Egbe branch, Lagos State, Foundation for Investigative Journalism had reported.

The unnamed staff was said to have requested for her private details, such as card and pin, in disguise to assist with the bank app during Njoku’s visit to upgrade the daily transfer limit on her account on March 18, 2022, which also fell on a Friday.

N600,000 was said to have been fraudulently deducted from her account the following day, which happened to be a Saturday – reflecting a pattern among the fraudsters and the victims of the fraud occurring in GTBank – despite police request for the bank to provide the staff, the bank allegedly said its head office was against presenting the accused employee.

Financial penalties against GTBank, other banks that fail to adhere to CBN’s resolution timeline

According to the customer protection circular released by the CBN, the banking industry regulator, in December 2019, failure to resolve customers complaints, within the apex bank’s prescribed timeline, attracts N500,000 per complaints per week while the infractions subsist.

Also, “Non-acknowledgment of complaints from customer or non-issuance of tracking numbers-N2.000,000.00 per complaint.

“False or non-rendition of Returns/Reports – NI00,000.00, and in addition, NI0,000 for each day the infraction continues.” the CBN circular stipulated.

GTBank did not respond to email enquiries from Ripples Nigeria on the suspected fraudulent activities experienced by its customers as at the time of this report.

Investors trade N2.3bn worth of stocks as Nigerian capital market’s value drops by -0.1%