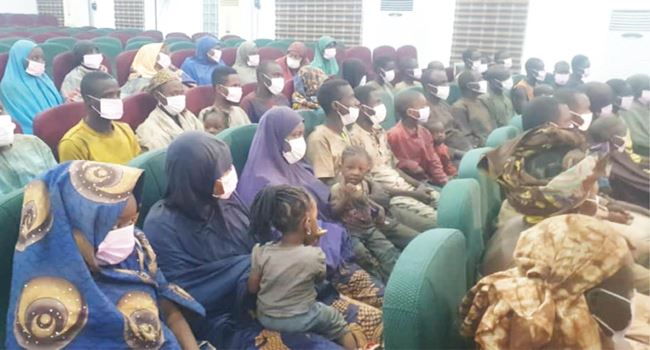 Some of the freed passengers who were kidnapped on February 14, along the Kontagora-Minna Road in Niger State, and were rescued on Sunday, have been narrating the harrowing experiences they went through while in captivity.

The 53 passengers were travelling in a Niger State Transport Authority bus from Zamfara State to Minna, when the bandits waylaid the vehicle and abducted them.

They were, however, released after negotiations facilitated by Islamic cleric, Sheikh Abubakar Gumi, who met with the bandits in their hideout.

While interacting with journalists on Monday in Minna, the state capital, some of the rescued passengers said they went through hell in the hands of their abductors.

One of the freed passengers, Hajia Jummai Isah, said:

“They were threatening us and beating the men among us. They really beat the hell out of the men, but all they wanted from us was money.

“They kept demanding money from us so that they would spare us, if not, they said they would kill us. They used to give us dirty water to drink from the stream.

“Their ammunition is out of this world. I’d never seen that kind of arms before in my life. They’ve different kinds of assorted weapons.”

Another passenger, Muhammed Kindagi, a civil servant with the Niger State Science and Technical School Board, also narrated the terrible and horrible experience he went through.

“If we ate in the morning, we wouldn’t eat another meal till evening, with contaminated water to drink.

“We were sleeping on bare ground in the bush. We were not tied, but guns were pointed at our heads and they were beating us constantly every day.

“They beat our women too. There was one useless one among them who didn’t bother whether you’re a woman or a man before he started beating you.

“They beat us with sticks. As they were beating us, they were asking us to bring money.

“They asked us to forgive them and we said we forgave them. We asked them to forgive us too so that we could leave the bush.”

For Hamza Muhammed Buhari, the experience was nightmarish and something he will not forget in a hurry.

“They starved us because they only gave us handful of food that was not enough. We cooked rice with contaminated water, while about 10 of us took a bottle of contaminated water. We were tortured daily. It was indeed bad and terrible.”

Ohanaeze Ndigbo laments use of force in Orlu by military