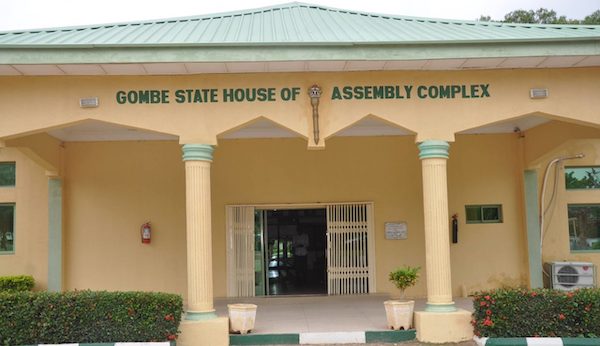 The Speaker of the Gombe State House of Assembly, Abubakar Luggewero, is currently fighting to retain his seat after a fresh leadership crisis hit the Assembly over a constitutional review exercise.

This came after seven members of the Assembly publicly asked the Speaker to resign from the seat if he cannot coordinate the House to present its position to the National Assembly on the proposed alteration of the 1999 Constitution.

The lawmakers who signed the paper presented to the speaker in a chat with journalists in Gombe accused Luggewero of sinister moves on the matter.

They decried the speaker’s refusal to mobilise the people of Gombe State to make their positions on the proposed constitution review after the deadline for the submission of their resolutions to the National Assembly ended on September 15.

The spokesman for the group, Ibrahim Rambi Ayala, who is representing Billiri East Constituency, appealed to the National Assembly to give the House another to collate and present the positions of the state on the constitution amendment.

He said: “We want to put it on record that the leadership of the House, in particular, the Speaker, has been employing various tactics to frustrate the process and disenfranchise the good people of Gombe from making their voices heard through their representatives.

“It is unfortunate that the House conducted a public hearing and a retreat for its members, the speaker wants to unilaterally drown the voices of the people of Gombe State on an important national assignment.

“All the State Houses of Assembly were expected to transmit their positions on the matter on or before September 15, 2022 but the Gombe State House of Assembly had been under lock and key with the speaker reluctant to convene plenary for us to vote on the constitutional alteration.”

The group, therefore, called for the convocation of plenary on September 20 to enable the lawmakers to give concurrence to the bills for consideration.

However, the embattled speaker has denied the allegations, saying that the House can only act on the matter after receiving the ad hoc committee’s report.

He said: “The group got it all wrong, more so the House under my leadership is ever ready to discharge its responsibility anytime the House receives the report from the committee set up by the lawmakers to come up with recommendations.”

The latest crisis is the second in the Assembly in the last 12 months.

The lawmakers clashed with Luggerewo in August last year by refusing to convene the Assembly for three months.

Related Topics:#featuredGombe Assembly
Up Next

ADC blasts APC, PDP over insecurity in South-East, boasts of victory in 2023

Confusion in ADC, as Interim leadership overrules expulsion of Kachikwu, others