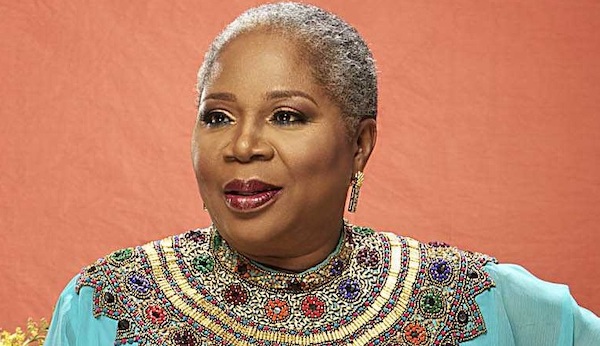 ‘Elegant stallion’, Onyeka Onwenu has revealed why she turned down the chance to be one of the many wives of late Afrobeat legend, Fela Anikulapo Kuti.

The veteran singer who made the disclosure in her new autobiography, titled ‘My Father’s Daughter’, said that Fela approached her for marriage in the eighties but she rejected his proposal during one of her visits to his club because of his other wives.

While narrating how Fela proposed marriage to her, Onyeka who revealed that she is a possessive lover added that she did not understand Fela’s love for women at the time.

Onyeka wrote: “The second time I saw Fela was in 1984, a few years after I had returned from the United States. He had just been released from jail.

“He was arrested for attempting to travel with his band for a gig in London with the sum of 1,600 pounds for their hotel accommodation. At the time, carrying any amount of foreign currency was against one of the many decrees promulgated by the Buhari/Idiagbon military junta.

“After he was released from prison, Fela sent a mutual friend, the journalist Onuorah Udenwa who is now a US-based pastor, to bring me to his club. I thought that he probably wanted to thank me for speaking up for him, but that was not it.

“He never even mentioned the article I had written in solidarity with him. Fela wanted to marry me, and I was flattered. I thanked him for the honour of wanting me to become his consort, but I turned him down all the same.”

The incident was revealed by DJ Spinall who told American media personality, Ebro Darden during an interview that the Afropop queen was exhausted from a long trip and was forced by him to come for the video shoot right away.

“We had the record and we shot the video in London. She [Tiwa Savage] actually fainted at the video shoot because she was exhausted from a long trip and I forced her to come for the video shoot right away. So she collapsed on me and I was scared,” DJ Spinall revealed.

Scores of fans are itching for the return of ‘The Village Headmaster’ after it was announced recently that the recording stage of the first season had been successfully-concluded and expected to start airing in April 2021.

Former President of the Actors’ Guild of Nigeria, Ibinabo Fiberesima turned 50 recently and used the occasion to flashback on the past decade which according

to her taught her a litany of lessons that defined the person that she is today.

In a lengthy post on her official Instagram page, the fair-skinned actress said that during that time, she recognised her strength and capabilities, while also adding that she thought she would have been married before she clocked 50.

“My 40s oversaw a period of struggle, failure and painful loss, but it also assured, enlightened and made me more confident and blessed. Through that time, I recognised my strength and capabilities, rediscovered myself and my potential, optimised my goals and have learned to prioritise what and who is truly important to me.

“Yes, I thought I’d be happily married by now, living on a yacht and travelling the world, amidst other cares, but it’s easy to forget LIFE IS STILL AN OPEN DOOR, for many went even before they came. So I choose to reflect on what I have accomplished in my 50 years and how fortunate I am to be rich with life, with love, with family and with friends,” she adds.

We gather that the approval was granted by the Nigerian Copyright Commission (NCC) allowing MCSN to continue to operate as a CMO or collecting society for musical works and sound recordings.

Reacting to the development, MCSN expressed its deep appreciation to the Director General of the NCC, Mr. John Ohi Asein, and also assured everyone in the sector, both creators and users, that there would be a fair deal for all.

UNILAG debunks reports it is charging N50,000 for online classes