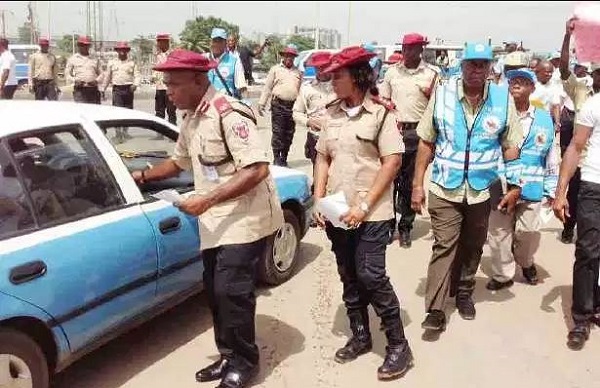 In reaction to reports of an accident on Friday in Ibadan, the Federal Road Safety Corps (FRSC) on Saturday cautioned its officers against chasing erring motorists no matter the traffic offence committed.

FRSC Corps Public Education Officer, Bisi Kazeem, issued this warning in a telephone interview with the News Agency of Nigeria (NAN) in Lagos.

Some officials of the FRSC had chased a commercial Micra car with registration number, Lagos 831 DH into a fatal accident around Moniya area of Ibadan. The accident which involved six persons left three injured while the others were unhurt.

According Seun Onijala, Oyo State FRSC Corps Education Officer, “the officials asked the Micra car to stop and the driver refused to do so and decided to turn the wheel of the car to the officials at the right and left side of the road with the aim of knocking them down.

“The FRSC officials were able to move away to the other side of road and the driver of the Micra car moved on and the patrol team van gave the Micra car a chase.

“In the process of the chase, a trailer was coming on the one way of the road and the option for the Micra car and the FRSC Van was either to both have an head-on–collision with the trailer or fell into the wide hole by the road side,’’ Onijala said.

He said that both the Micra car and the patrol team van plunged into the wide hole by the road side and three persons were injured and the remaining three were unhurt but nobody died in the accident.

However, Corps Marshal of the FRSC, Boboye Oyeyemi, frowned at Fridays incident.

According to Corps Public Education Officer “The Corps Marshal, Boboye Oyeyemi, condemned the act as it is our rule that officers should not chase any erring motorist.

“Rather the vehicle number should be taken and the offender will in no time be arrested through our drivers’ license portal.

“As a paramilitary agency investigation must be carried out and if the officers are found guilty, they will be dealt with accordingly,” Kazeem said.