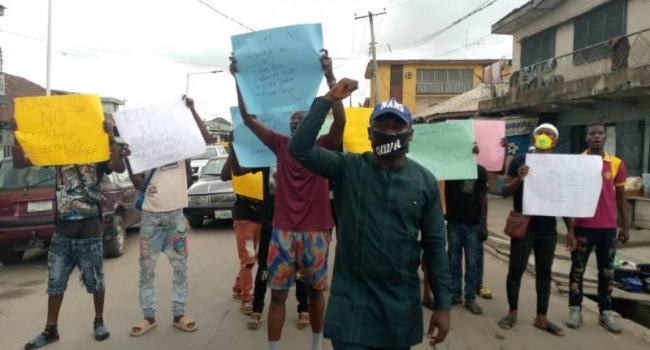 The recent hike in the price of petrol and electricity tariff saw Nigerians took to the streets in different states on Tuesday, September 8, to protest the development.

In Oyo State, students, workers and civil society organisations were seen in streets of Ibadan, the state capital with different placards bearing different inscriptions that condemned the action of the President Muhammadu Buhari-led government’s action.

The chairman, Joint Campus Committee of the National Association of Nigerian Students (NANS), Mayowa Opakunle, speaking said, “We are out on the streets to register our grievances and show our displeasure at the wicked policies and unjust treatment of Nigerians by the federal government.”

In Abuja, the protest was staged by Civil Society Organisations under the auspices of Nigerians Against Bad Policies.

They protesters shutdown the premises of the National Secretariat of Nigeria Labour Congress (NLC), accusing the union leadership of being silent over the action of the federal government.

One Gerald Katchy, who spoke on behalf of the group in Abuja said, “We say no to fuel price increase and hike in electricity tariffs. We want NLC President, Ayuba Wabba, and TUC to call for a total strike and shutdown of all sectors of the economy until this wicked and insensitive government reverses fuel pump price to N87.”

The chairman of Ogun NANS, Tomiwa Bamidele, who spoke to newsmen said, “We believe that our students are the end receivers of these anti-masses and anti-poor policies because an increment in the price of petroleum is an increment in the cost of transportation.

“And now that our students are going back to school, they will have issues; the salaries of their parents have not been increased, and the government has not put in place measures to reduce the suffering of our people.”

In Osun, the protest march was also staged by NANS in Osogbo, the state capital.

Speaking during the protest, the coordinator of the #RevolutionNow Movement in Oyo State, Olawale Bakare, asked the Buhari government to reverse the hikes in three weeks.

The protesters in Osun took off at Freedom Park.

In Lagos State, the secretary general of the NANS, Zone D, Giwa Yisa said their members protested despite the presence of security agents, including the police and army, who were deployed in the Ojota area, where the protest was to take off.

“If you say you have removed subsidy, where is the money going to? ASUU is on strike; our educational facilities have packed up, can’t you make another refinery and repair the existing ones with the funds from the subsidy? These are the questions we are asking,” Yisa said.

He noted that the Tuesday protest was just the beginning.