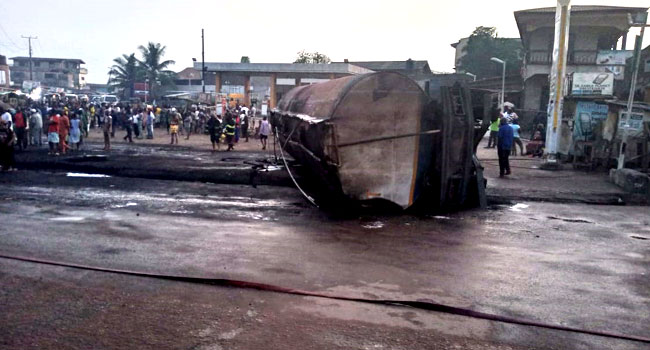 The Lagos State Fire and Rescue Service acknowledged the incident, stating that it happened at 2:06 a.m.

The truck was carrying 45,000 gallons of fuel when it collapsed and spilt its contents over the road, according to the report.

The event happened on the highway’s Ajegunle Bus-Stop of Alagbado (a border village) axis, causing traffic as inhabitants fled for their lives.

Mrs Margaret Adeseye, the Director of the Service, stated that one person was found dead in the inferno, that three vehicles and some shops were also burned, and that the conflagration was caused by the spillage of Premium Motor Spirit (PMS).

The statement said,” Reports of the incident got to the service at 2 .16 a.m on Friday.

“The accident occurred when a 45,000 litres PMS capacity tanker wanted to negotiate a bend on the highway as it was on its way to serve a Petrol station.

“The spillage spread to the roadsides and the residents started to scoop the PMS, this nefarious activity ensured the fire outbreak.

“These people risked their lives, the service has warned residents severally, never to scoop PMS. However, the situation has been brought under control by the firefighting crews.”

A 15-year-old boy identified as Oluwatobi Lawal, reportedly died in the incident while the inferno consumed 42 makeshift shops.