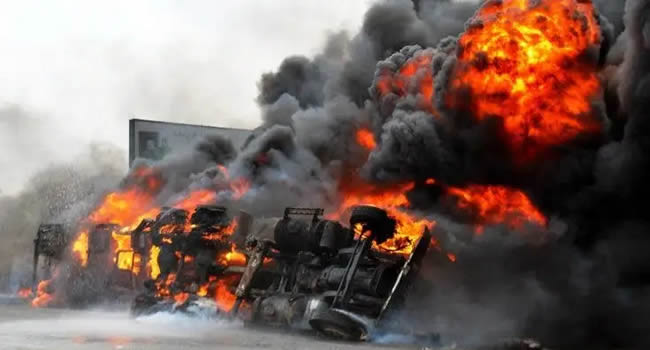 At least 13 people were killed on Sunday and many others seriously burned when a fuel truck overturned and exploded in western Kenya as crowds thronged to collect the spilling fuel.

According to the police, the fuel truck had collided with another vehicle and toppled over near Malanga, 315 kilometers northwest of Nairobi, on the busy highway between Kisumu and the border with Uganda.

Residents of the area then rushed to the scene with jerrycans to scoop the spilled fuel but the cargo exploded and engulfed those around in a fireball.

Charles Chacha, a police chief in the Siaya county where the incident occurred, said:

“It (the truck) burst into flames as they scooped fuel that was flowing.

“We counted 12 bodies at the scene. Another person died in hospital from their injuries.

READ ALSO: Kenya’s AIfluence closes $1M to scale its AI-powered venture. 1 other thing and a trivia

“Fire crews arrived on the scene two hours later to douse the inferno while those injured in the blast were taken to hospital.

“Many others have been taken to hospital with serious burns and they include young children,” Chacha said.