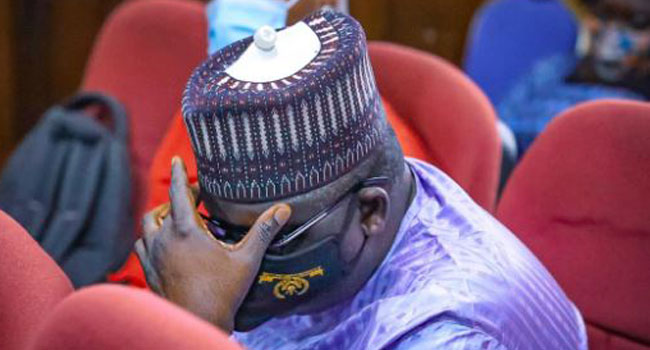 A Federal High Court in Abuja ordered Mania remanded in prison after he was brought to court by a combined team of policemen and operatives of the Economic and Financial Crimes Commission (EFCC).

The EFCC is prosecuting Maina over alleged money laundering alongside his company, Common Input Ltd.

A Federal High Court in Abuja has ordered that the former Chairman of the defunct Pension Reform Taskforce Team (PRTT), Abulrasheed Maina, be remanded in prison pending the conclusion of his alleged fraud trial.

The trial judge, Justice Okon Abang gave the order on Friday in response to an application by the Economic and Financial Crimes Commission (EFCC).

Counsel to EFCC, Mohammed Abubakar, in the application had prayed the judge to send Maina back to prison.

In his ruling, Justice Abang said, “The defendant is already on bench warrant having jumped bail.

“So he shall be remanded in correctional centre pending the conclusion of the trial.”

He then adjourned till December 8 for continuation of Maina’s trial.

But Maina, after Senator Ali Ndume stood as his surety and he was granted bail, jumped bail and ran to Niger Republic.

He was later apprehended at the weekend and extadicted to Nigeria on Thursday, December 3.

On Friday, security operatives brought him to the court to face his trial.