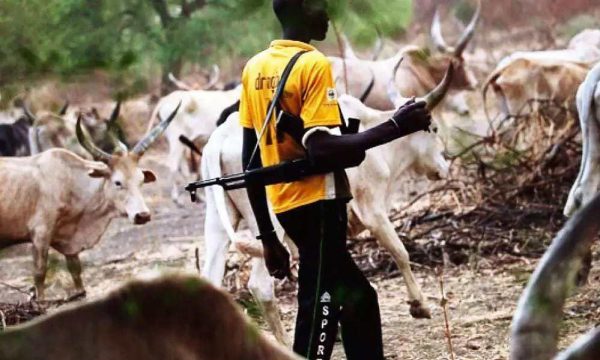 Where are Nigerians going to run to or who are they going to call on, to save them from Fulani marauders across the Country? Fulani freedom to graze on all god-given farms only happens in a cow republic. Africans watch in horror as the so called African Giant struggle to free itself from incessant raiding of their farms and homes by Fulani Janjaweed. People live in fear and are running away from villages and towns as if they are in Rwanda, Sudan, Somali, Liberia or Biafra during the civil wars.

A country led by Fulani wannabe slaves that value the lives of cows more than those of humans will be ruled by cow heads. It is only in Nigeria that you hear that all bandits are not criminals or stealing is not corruption. When you put people that have been raising cattle the same way since ancient times to rule a country in the 21st Century, we deserve what we get. Especially, if Fulani greatest enabler who got Buhari elected by default is a well educated man with a PhD in Zoology, that had votes and goodwill across the Country in his first term.

Patrons pledge Amnesty to bandits, Fulani herdsmen, Boko Haram, Niger Delta Militia and looters while those that play by the rule of law or protest peacefully get shafted by the Army and Police. Nigerians cannot even defend themselves before the Fulani cow rulers dispatch their battalion of soldiers to suppress inalienable right of self-defense in the face of Fulani invaders. Open farm grazing is unproductive, outdated and has no economic viability in the 21st century. Do not use your cultural aggression, religious doctrines and primitive business to destroy other people’s modern farms and businesses. Other African countries realized that.

Many African countries remember how we formed a coalition of soldiers to enforce peace and security that even American soldiers would rather avoid as they stayed on shore in Liberia. Unfortunately, when the civil war took place in Liberia, it took a combination of African Army dominated and led by Nigerian troops to restore Peace in Liberia. The worst was in East Africa between the Tutsis and the Hutus. The Tutsis fled their own Country from the Hutu, into the neighboring countries. Which countries are Nigerians going to flee into?

Whenever any of the Fulani slaves like the Talikawa that were neglected at home, are resisted outside their villages, the Fulani Kitchen Cabinet with wives and children overseas, becomes furious that any part of Nigeria has the audacity to repulse the Talikawa they sent outside for relief as beggars or cow rearers because they are idle at home without benefits, jobs, schools or healthcare. They only become concerned for the welfare of those they refused to take care of when sent on ancient grazing destroying farms, homes and businesses outside.

If you think Nigerians cannot save themselves from the Fulani descendants of Usman Dan Fodio that captured Seven Hausa States and installed themselves as Emirs; you have not heard about other African countries. They look at Nigeria in horror wondering why this glorified Giant cannot heal itself. Indeed, they are learning and are well prepared for the atrocities of Fulani Janjaweed infiltration into their countries to prevent the takeover of Africa.

When you have a Head of State that shares a few drops of Fulani blood from Niger through an abused Hausa mother in Nigeria as the Grand Patron and Chief Negotiator of Boko Haram, it becomes easier to understand. Boko Haram and Fulani Marauders are the First and Fourth world’s deadliest Terrorists. These two have supporters locally and internationally. The previous Government was forced to back off the fight against Boko Haram and mercenaries were fired so that these terrorists organizations can flourish in Nigeria

The real face of Buhari and his kitchen cabinet as Terrorists has emerged. Fulani commanders used Janjaweed as Political thugs declaring open borders in the Northern part of the Country. They use open grazing of tired, malnourished and unproductive cows to destroy legitimate farm businesses in the Central and Southern part of the Country, claiming Freedom of Movement on their god-given land of Cow Republic. More massacres come from these Northern Fulani/Hausa than from all ethnic groups in Nigeria.

Read also: It is not Buhari, stupid!

During the first coming of Buhari with Idiagbon as his Deputy, he overthrew an elected demonstratic Government of Shehu Shagari based on Corruption and implemented Operation War Against Indiscipline. It was the same charade Usman Dan Fodio used to capture the Hausa States. Buhari has finally exposed his real self as a Terrorist-In-Chief willing to do anything to subjugate Nigerians to the whims and wishes of his Hausa conquerors, Fulani from anywhere.

Indeed, during the hearing confirmation for ambassador, Buratai the immediate Army Chief confessed that it will take 20 years to defeat Boko Haram, that is, not in his lifetime. Enough to demonstrate Fulani have no plan to rescue the Country anytime soon. It makes our Youths wonder when they would be free! So, no freedom from Fulani or Boko Haram as Ian Smith, the Northern Rhodesia Prime Minister had said before the country became Zimbabwe!

Unlike other African countries, Nigeria soldiers continuously die in Sambisa with no respite in sight, despite Buhari pledge to take Boko Haram on and end their terror throughout Nigeria before he was demonstratically elected. Instead, the Army and Police fleeing well armed Boko Haram were deployed to the South to kill unarmed civilian Protesters in the Middle Belt, East, Southsouth or West. Some reward eeh; to harrass civilians for bribes, rape, maim and kill like Fulani herdsmen. Misplaced priority that baffled people of goodwill. Sambisa hot no be Lagos!

Have you wondered why Fulani Terrorists that are rated the fourth most dangerous in the world had to beg Law Enforcement Authorities in Ghana for Peace? No ethnic group in Ghana is submissive to their religious fanaticism which conquered their ethnic states like the seven Hausa states in Nigeria. Their god-given Right to all lands for cow grazing under which they hide to destroy productive farms, violate wives and daughters of workers, then kidnap and kill their husbands for ransom are not tolerated in Ghana or anywhere.

There is nothing like the Hausa/Fulani ethnic group. It was created in Nigeria to subdue the Hausa after their seven States were taken over by Fulani Emirs. Indeed, the Hausa in Nigeria are still the only ethnic group under colonization. The rest of Africans had moved on to Neocolonialism until Nkrumah’s discerning mind woke up some Africans.