Gana: How not to kill a repentant criminal! | Ripples Nigeria

Home » Latest » Gana: How not to kill a repentant criminal! 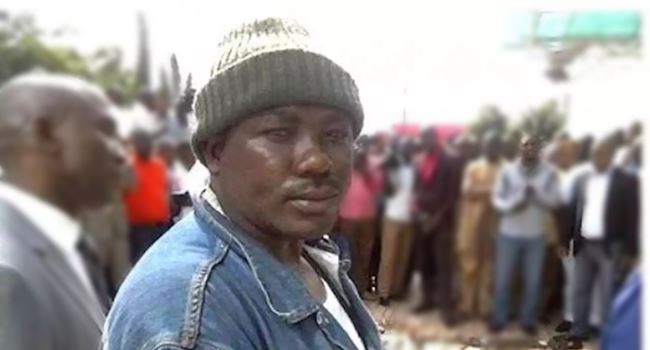 Terwase Akwaza, better known as Gana, was a notoriously dangerous political thug turned armed robber in Benue State. He was said to be a dare-devil bandit used by politicians in the state to rig elections before he dabbled into more profitable venture of armed robbery and kidnapping. Gana had terrorized and tormented many inhabitants of Benue state so much that a 50 million Naira bounty was placed on his head by the state and federal governments.

Gana met his waterloo recently in Gboko town when a military unit mounting a road check-point killed him after a shoot-out as the army command declared officially. About 40 members of Gana’s gang were captured in the process and taken prisoners. He died while on his way to the state capital city of Makurdi where he was to have surrendered and embraced the amnesty programme organized by the state government.

Akwaza was reported to have had five wives! And his children could have been up to a dozen (if not a score) if the wives were fecund enough! Criminality often breeds a false sense of importance and concomitant invincibility.

Besides, it attracts libidinal impulses, aggression or ruthlessness. The proceeds of involvement in crime could be a source of sexual conquest or drive for same.

One of Gana’s children could try to emulate him by becoming another Anini if steps are not taken to take them in and educate them properly. In almost every society, decent or indecent like ours, there is an Anini or Gana lurking somewhere reminding the rest of us of our collective weaknesses. And the failure of the authorities to provide blanket security of lives and properties.

The brutal killing of Gana reminds one of the similar extra-judicial killing of Mohammed Yusuf, the fallen Boko Haram leader in Maiduguri, Borno State. Yusuf was killed by the police even when he posed no danger to the society having been captured. After his demise emerged Abubakar Shekau.

Shekau’s terrorist exploits could not be compared to the moderation with which the late Yusuf pursued his mission of western education constituting a sin in his warped misguided reckoning.

Yusuf was not as brutal and blood-thirsty as Shekau yet his apprehension and trial could have afforded him an opportunity for repentance and justice. Now, with the ‘unjust’ elimination of Gana another door may have been opened for a more violent dangerous successor to emerge someday to avenge his death!

What we are saying here is that Gana could have been given the opportunity to repent or have a date with justice rather than being set up and killed like an animal on the street. The consequencies could be grave for an already explosive security situation in the country.

The Benue politicians (including Senator Gabriel Suswam, the ex-Governor of the state) could be rejoicing believing that the vital evidence that would have exposed their involvement in the making of the Gana myth had been ‘killed’ for good!

Yet, there is something that boggles the mind over the cold-blooded murder of the wanted criminal. How on earth could a repentant criminal ready to change his devious ways be gunned down? Were the military elements that executed him not aware of the amnesty pogramme?

If what Governor Samuel Ortom was saying could be taken seriously as the truth — that the security forces were associated in the peace/surrender negotiations — why then would the army strike him down before the commencement of the amnesty?

Rumours in town had it that the military boys did a hatchet job by eliminating Gana in order to prevent him from spinning the beans and thus revealing the identities of his sponsors and godfathers. But we know one already: Gabriel Suswam.

Wantor Akwa, one of the five widows of Terwase Akwaza had said recently that her husband had wanted to work for God before he was killed by the Nigerian Army! Whatever that meant, working for God! She revealed that her husband came out of hiding because former Governor and Senator representing Benue North-East, Gabriel Suswam, had told him confidentially that he was involved in the peace deal.

Alas Senator Suswam betrayed Gana! Gana, prior to his untimely death, had said that if he did not see Suswam, he was not going to come out. He said until Suswam came around, he would not believe that the amnesty was true. That shows the extent he respected Suswam and the trust he reposed in him.

The extra-judicial killing of Gana represents in itself a crime against the rule of law and justice. It is how not to kill a repentant criminal! Justice is hereby called for even though Gana never served his victims ‘justice’.