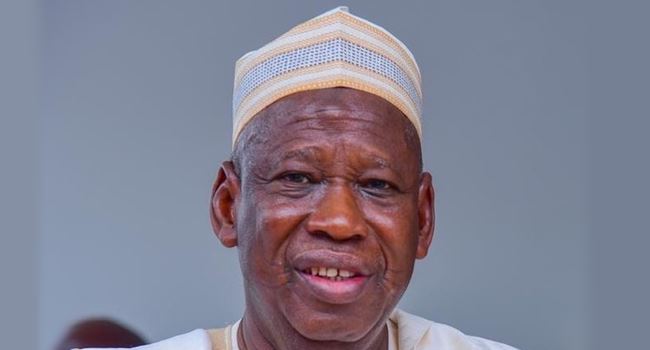 The Kano State Governor, Abdullahi Ganduje, has criticised comments attributed to his Kaduna State counterpart, Nasir El-Rufai, regarding the security situation in the North-West region.

Ganduje made this stance known via an interview broadcast on Radio France International and monitored by Ripples Nigeria.

According to the Kano Governor, El-Rufai might not understand the security efforts put in place by the governors of the area.

Furthermore, security agencies across the country have advised Kano, Kaduna and Bauchi states to collaborate and check the security challenges in the notorious Falgore forest in the Tudun Wada and Doguwa local government areas of Kano State, Ganduje revealed.

The governor stated, “The issue of lack of synergy does not arise in this context, because security agencies have advised us to come and meet with Kano, Kaduna and Bauchi states to see how the activities of bandits in the Falgore forest can be contained.

“I intimated both governors of Kaduna and Bauchi. Both have sent their delegations.

“There was the issue of funds. Kano, Kaduna, and Bauchi states have all donated their funds and the exercise was eventually successful.

“The way I see it, the governor (El-Rufai) did not understand security issues well because the security situation depends on the nature of a state. For instance, no matter how we strongly collaborate as governors, how should we check ethnic clashes in Kaduna? How should we check religious differences in Kaduna? You see, this is a problem that can only be checked by the Kaduna State Government itself.

“For instance, in Kano, we have a harmonious working relationship with security agencies. We have state-of-the-art security gadgets. In the Dansoshiya forest, we are building houses to accommodate Fulani herders in a bid to stop them from grazing in the southern parts of the country.

“In the Falgore forest, there is an ongoing project of a military training camp. In the project, there is a provision for areas where Fulani herders will be accommodated. We, therefore, have this plan long ago.”

Ganduje added, “We have enough places to accommodate Fulani herders in the Dansoshiya and Falgore forests. To restrict them to those places in order to prevent them from grazing in the southern part of the country is the only panacea for the lingering crises.

“There are three categories of Fulani. There are Fulani, there are herders and there are foreign Fulani herders, who commit crimes.

“It is often forgotten that there are foreigners among those Fulani herders, but nobody is talking about them. The moment a foreign Fulani herder infiltrated Nigeria and commits a crime, he will be considered a Nigerian Fulani. Therefore, it is high time to ban them from entering Nigeria.”

El-Rufai had warned that insecurity will continue to escalate in the northwest of Nigeria as long as the states refused to coordinate their policies in dealing with banditry.

This was in the aftermath of Saturday’s mass killings by suspected bandits in Birnin Gwari Local Government Area of Kaduna State.

The bandits stormed a village in the area around 5:30 p.m. on Saturday and killed 18 residents and robbed others.

According to El-Rufai, attempts were made at cooperation among governors in the northwest on tackling banditry but it did not succeed because the governors adopted different policies in addressing the challenge.

“As a result, every state is fighting in it own way. If we cannot come together for the federal government to provide us with soldiers and police to enter the bush and kill all the bandits, it will be difficult to succeed in the fight against banditry,” El-Rufai said.

“There is no synergy among the governors in the northwest on how to end the banditry. But Kaduna is collaborating with Niger State on modalities to end the killings by the gunmen.

“State like Zamfara adopted a policy of dialogue with the gunmen, giving them amnesty, which I don’t believe in. With this, we have differences on how to tackle the situation,” the governor said.

“We sat together with the governors in Katsina but we disagreed on how to tackle the criminality. Some believed on dialogue while others didn’t.

“It is deceitful to believe that a person who is now counting millions as gains from ransom will embrace dialogue and return to his previous lifestyle where he saw little money occasionally,” El-Rufai said.