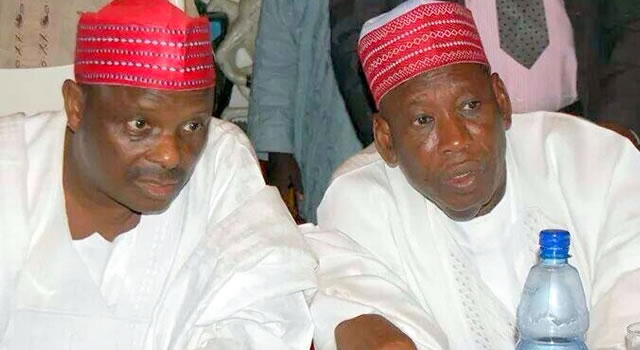 Senator Bola Tinubu and his team saddled with the responsibility of reconciling aggrieved members of the ruling All Progressives Congress (APC), may have no need of trying to settle the rift between Kano State’s Governor Abdullahi Ganduje and his predecessor, Senator Rabiu Kwankwaso.

This was as Ganduje on Wednesday ruled out the possibility of anything bringing him together again with Kwankwaso, whom he deputized for as governor of Kano State for eight years.

Ganduje’s position on the rift between him and Kwankwaso came just two days after President Muhammadu Buhari appointed a leader of the APC, Senator Tinubu, as the head of the party’s committee, to reconcile and build confidence among members of the party.

Ganduje, who spoke at a function in Kano, said that he was totally disappointed by the attacks meted out to his administration by his predecessor at the beginning of his leadership.

“We have had enough of such a vendetta, which had been raging with no end in sight. We have parted ways with Kwankwasiyya forever.

“They have erroneously believed and have been telling people that we are on the road to losing our seat in the 2019 general election. I find such a permutation laughable and a mere ranting of a wounded lion,” Ganduje said.

The governor then called on Kano State APC members to ensure to put up concerted efforts so that the party will emerge victorious in the 2019 general elections.

Reps pass ‘vote of no confidence’ on IGP Idris over herdsmen killings, insecurity