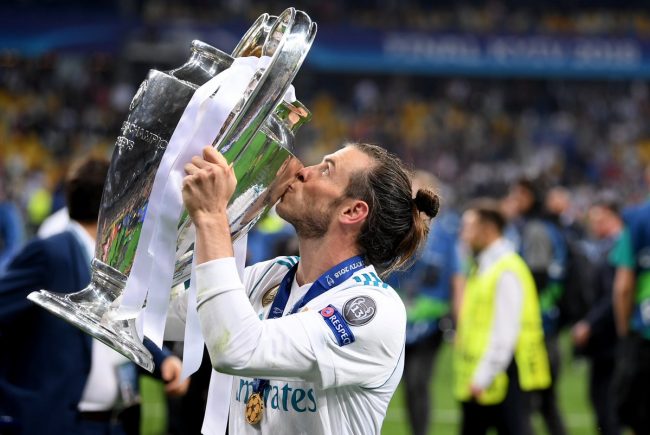 Substitute Gareth Bale made all the difference with a stunning man-of-the-match performance to spur Real Madrid to another Champions League victory as they saw off Liverpool 3-1 in the 2017-18 final in Kiev, Ukraine on Saturday night.

With the win, the La Liga giants are now a record 13-time winners of the competition and have become the first team to win the European Cup/Champions League in three successive seasons since Bayern Munich between 1974 and 1976.

Liverpool forward Mohamed Salah played for only 30 minutes as he went off for Adam Lallana after a shoulder injury courtesy of a tackle by Sergio Ramos.

Real’s Dani Carvajal also made way for Nacho seven minutes later as the right back hurt himself while trying a backheel.

After a goalless but eventful first half, Karim Benzema scored the opener on 50 minutes from a careless throw by goalkeeper Loris Karius, but the lead was short lived as Sadio Mane equalised for Liverpool just five minutes after finishing off a corner.

Bale came in on the hour mark replacing Isco and with his fourth touch in the game, he put Real ahead with a8 stunning bicycle kick from Marcelo’s cross, before the Wales striker made it 3-1 with a shot from 30 yards that slipped through the hands of Karius.

Cristiano Ronaldo, highest goal scorer in the Champions League, would have made it four for Real Madrid just before the final whistle but a fan ran into the pitch and disrupted the game.

Speaking after the game, match winner Gareth Bale said: “Obviously I was very disappointed not to start the game, I felt I deserved it but the manager makes the decisions. The best I have been doing is to come on and make an impact, I certainly did.

“It (the bicycle kick) has to be the best goal in a Champions League final, there is no bigger stage. I am just happy to get the win.

“It is a team game but when you are a substitute, it is a game of more than 11 players. I made an impact.

“We know what we have achieved and how good we have been. The league was disappointing but we won the Champions League. It turns out to be a great season,” he stated.

Real finished 17 points behind rivals Barcelona in La Liga this season but they are kings of Europe again.

The boss, Zinedine Zidane who joined the side in 2016 has never been knocked out of Europe as a manager and becomes just the third manager to win the European Cup/Champions League three times (after Bob Paisley and Carlo Ancelotti), but the first to win it in three consecutive seasons.