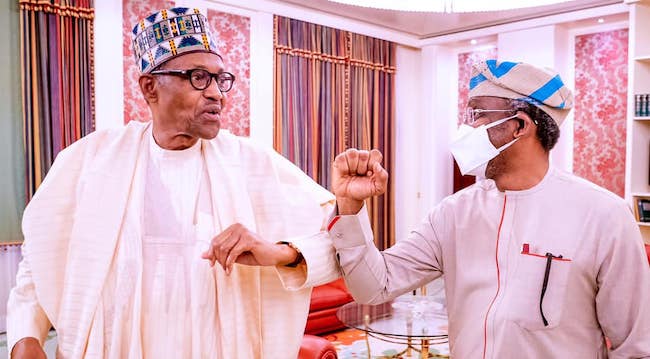 President Muhammadu Buhari on Thursday held a closed-door meeting with the Speaker of the House of Representatives, Femi Gbajabiamila, at the Presidential Villa, Abuja.

The Speaker, who addressed State House correspondents on the outcome of the meeting, expressed optimism that the Electoral Act recently passed by the National Assembly would soon be signed into law by the President.

He said the President has always declared his preference for direct primaries.

Gbajabiamila said he was in the State House to brief President Buhari on happenings in the country, especially on the National Assembly.

He said: “I just came to brief the President about the goings-on in the country as it affects the National Assembly.

“We had a very robust discussion about the tripartite committee, Electoral Act amendment, which is what I am sure you are asking about. If I tell you we didn’t discuss that, I will be lying to you.

READ ALSO: Why I pressed for direct primaries – Gbajabiamila

“Hopefully, we will get the Electoral Act Amendment Bill transmitted now that he is back, very soon.

“We are hopeful it will become law and Nigerians will be better for it.”

On the governors’ reservations over the direct primaries, the speaker said the National Assembly could not put a price tag on democracy when making decisions.

Gbajabiamila added: “I have heard that argument about cost. And this is what I have to say. Do you put a price tag on democracy? I don’t think you should.

“What is too much and what is too little to buy freedom and democracy? I don’t think you should put a price tag on it.

“But we have passed the law. The official position of House of Representatives and the Senate, we are for direct primaries.

“We are for empowering the people at the grassroots level. Let everybody participate in governance. Democracy is defined as a government of the people, for the people and by the people.

“People is used three times in that definition. And it doesn’t start from general elections. It starts from primaries. So, we have made it very clear abundantly.”

On Buhari’s response to his presentations during the meeting, the speaker stated: “The President is happy. He will look at all the issues we have brought to his attention. We talked about the Electoral Act amendment. We talked about agricultural development and other issues.

“All of the issues, the President will look at them.”