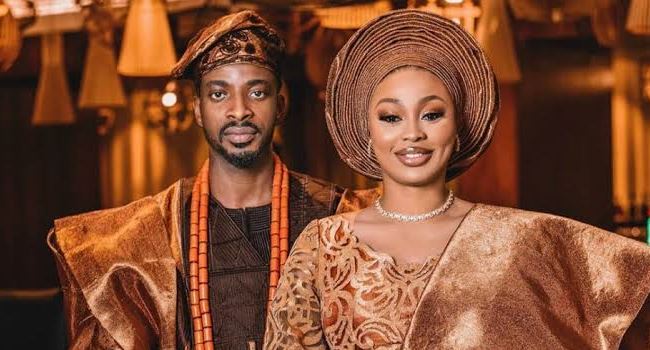 After years of snide remarks, Celebrity Gist can confirm that the duo of Bukola and Gbemi Saraki had decided to bury the hatchet over a long-standing feud.

We gathered that Gbemi and Bukola decided to end the feud at the eighth-year remembrance ceremony of their late father, Dr. Abubakar Olusola Saraki, following the intervention of Lagos-based cleric, Sheikh Sulaiman Farooq Onikijipa.

Ironically, the animosity between the duo begun on the same building in 2011 where a distraught Gbemi accused her brother of opposing her bid to becoming Nigeria’s first female governor.

‘Gongo Aso’ crooner, Abolore Akande aka 9ice is in the eye of the storm again over alleged infidelity.

A blog, Gistlover, had recently posted a video of the singer kissing an unidentified woman and this infuriated his wife.

The singer, who has admitted to cheating on his wife, said he made a terrible mistake.

9ice, who has had two failed marriages, urged Nigerians to help him beg the woman whom he married about one year ago to avoid another marriage collapse.

The pair of Olu Jacobs and his wife, Joke Silva, marked their 35th marriage anniversary last weekend to the delight of family, colleagues, fans and movie lovers alike.

The couple, who first met in 1981, has since become a shining example for many in marriage institution as their union which is blessed with two children has stood the test of time.

The Nollywood veterans spent most of this week celebrating their wedding anniversary with Joke taking to her verified Instagram account to celebrate their over three decades’ union.

She wrote: “Maybe not forgotten but overwhelmed. “Totally forgot. 35 years together. Thank you, Lord. Here is to many more years. Happy wedding anniversary Omo boy @_olujacobs.”

In his reply, Olu Jacobs wrote: “We were having a management meeting for a play, Wole Soyinka’s Jero Metamorphosis when a young lady walked in. Immediately she walked in, something inside me told me that she was going to be my wife and I told the people around me that I was going to marry her. That was in 1981. In 1986, we got married. I was not in a relationship. I had a disappointment that kept me away and I never wanted any serious commitment because the wound was still raw but when I met her, we talked and played a lot and it surprised people a lot.

“We travelled together a lot as well. When the time came, I did not hesitate and it was as if she was waiting for the question as well. I proposed to her in Tunisia because we were shooting a film, Ashanti. She came to join me there on her way to England and I asked her to marry me.”

Nollywood actress, Eucharia Anunobi, has revealed that she had a running battle with her father who wanted her to become a lawyer but she was hell bent on plunging headlong into the murky waters of the entertainment industry.

The veteran thespian, who later studied English Language at the University of Nigeria, Nsukka, said she stood her ground and followed her dream.

The father later soft-pedaled on his stance and today her stubbornness has paid off.

Anunobi wrote: “While I was growing up, my father wanted me to study law, but I opted to venture into the entertainment industry. My father stood his ground while I also stood my own ground. At the end of the day, my dream to become an entertainer overruled his.

“And today, I am more blessed than ever as a minister of the gospel, model and movie star.

After years of inaction and bad blood due to the proliferation of different factions, we can confirm that such divisions in the Performing Musicians’ Employers Association of Nigeria (PMAN) under the presidency of Mr. Pretty Okafor have been united.

This came after Justice J.D. Peters of the National Industrial Court sitting in Ibadan, Oyo State, who delivered judgment in a suit filed by Comrade Obi Okwudili Casmir’s (Uncle P) faction of the Association, ordered that activities of PMAN under Okafor should not be interfered or tampered with by anyone or group of persons acting in whatever guise until he completes his tenure in 2024.

The former Nigerian First Lady, Dame Patience Jonathan, has said if given the opportunity, she will marry her husband, Goodluck Jonathan, again because he has been a very good man to her and the family.

Mrs. Jonathan made the declaration at the 63rd birthday celebration of the former president in Abuja.

While presenting her husband with a customised birthday card, from where she read, the former First Lady said: “My husband, my hero, my king, the father of my children, I thank almighty God for choosing you to be my life partner.

“Not only are you the most loving husband a woman could ever wish for, but you are also my best friend. On this special birthday, I want to tell you how much I appreciate you in my life. It has been a blessing making this life journey with you.

“If I have to do it again my love, I would choose you to be my husband over and over. You are the best. To me, you mean the whole world and I love you more than words could ever express. May God bless you always. Happy Birthday.”

‘Be watchful of APC antics ahead of 2023,’ PDP cautions Nigerians