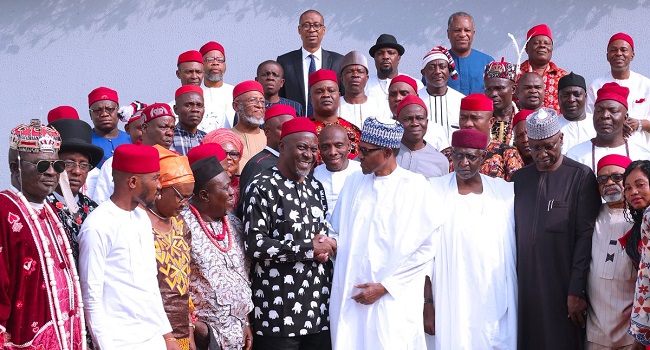 Secretary-General of Ohanaeze Ndigbo, Uche Okwukwu, has apologised to President Muhammadu Buhari over the endorsement of Atiku Abubakar, presidential candidate of the Peoples Democratic Party (PDP), by Nnia Nwodo, its president-general.

Okwukwu told Buhari that Nwodo is on an indefinite suspension pending the outcome of a nine-man panel to investigate “acts of misconduct and abuse of office as well as bringing Ohaneze to public disgrace”, submits its report.

Ohanaeze Ndigbo, Association of Eze Ndigbo in 19 northern states, the World Igbo Congress and the World Igbo Union, paid a courtesy call on Buhari at the presidential villa on Friday.

According to Okwukwu, the indefinite suspension of Nwodo is linked to the endorsement of Atiku.

Ohaneze Ndigbo had recently announced their endorsement of the Atiku/Obi ticket.

The endorsement generated some divisions within the group, with Anambra State Governor, Willie Obiano, one of the notable personalities faulting the decision.

Okwukwu said the Igbo identify with Buhari’s achievements of improving ease of doing business in the South-East. He assured him of massive support from the region.

Responding, Buhari said he was impressed by the show of support.

He said diversity is Nigeria’s biggest asset as a nation and it must be applied in the development of the nation.

The president said the perpetrators of crime whether in security, economy and corruption are from all ethnic groups and that his administration will not discriminate in its response.

He said he has identified key challenges for all regions and he will do his best to address them.

Despite S’Court ruling, Rivers APC says ‘All candidates of APC in Rivers State will be on the ballot’