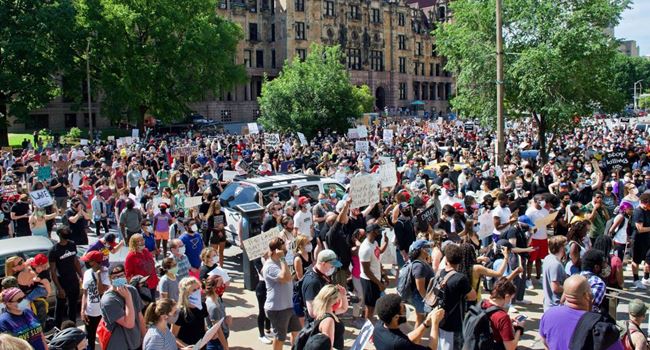 Thousands of angry protesters have continued to defy curfew imposed across the US to stem wild protests arising from the death of George Floyd, an unarmed Black man who died last week in police custody in Minneapolis, Minnesota.

Reports say protesters have remained undeterred by curfews and the presence of the US National Guard in some cities.

Largely peaceful protests have turned violent, with looting and vandalism as the night raged on.

Demonstrators have also continued to demand that all four officers involved be charged in Floyd’s death.

So far, only one – white officer Derek Chauvin, who knelt on Floyd’s neck for nearly nine minutes as the Black man pleaded, “I can’t breathe” – has been arrested and charged on Friday with third-degree murder and manslaughter.

Meanwhile, Pope Francis has reacted to the unrest in the United States, saying no one can “turn a blind eye to racism and exclusion” but condemning violence as “self-destructive and self-defeating”.

Francis, who dedicated the entire English-language section of his weekly audience to the US situation, implored God for national reconciliation and peace.