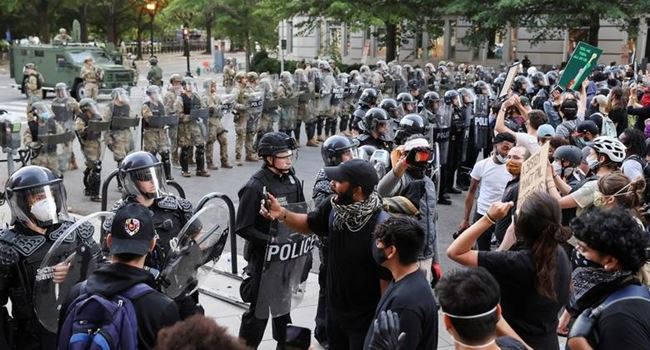 The President of the United States of America, Donald Trump, has threatened to use military force as wild protests continue over the killing of George Floyd by an ex-Minneapolis Police Officer, Derek Chauvin.

Trump on Tuesday said that he was recommending that governors deploy the National Guard in sufficient numbers to “dominate the streets”.

If governors fail to take action, Trump said he would deploy the US military and “quickly solve the problem for them.”

Trump, in his Rose Garden remarks, said he would mobilise the US military to end “lawlessness” as police fired tear gas at hundreds of peaceful protesters gathered outside the White House.

His comments came after Derek Chauvin was set to appear in court for a hearing on Monday June 8.

The hearing previously scheduled to hold yesterday 2:00 pm Eastern Time (7:00pm), as jail records and a Hennepin County Court official disclosed was pushed back until June 8.