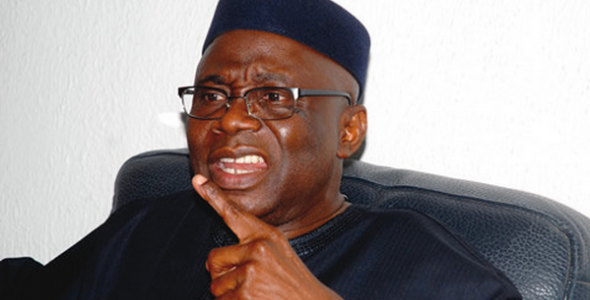 Lagos-based cleric, Pastor Tunde Bakare on Monday claimed that God had told him not to quit politics.

He said God also asked him to join in the race to become the president of Nigeria.
Bakare, the Serving Overseer of the Latter Rain Assembly, was the vice-presidential candidate to Muhammadu Buhari on the platform of the defunct Congress for Progressive Change (CPC) in the 2011 presidential election.

The cleric, who said he had contemplated quitting politics, however told members of his church during service at the Latter Rain Assembly in the Ogba area of Lagos on Monday, that following God’s instruction he was going to remain a politician and run for presidential position at the appointed time.

Continuing again he said, “This twelfth one is a difficult one for me. It may draw excitement or condemnation. I have tried my best to keep it (to myself) but the Holy Spirit will not allow me to do so.

“In my study around 4am on Sunday morning, God told me ‘you cannot bring your political career to a close; there is still more to do. Run for the Presidency. I will do it at the appointed time.”

On how he will get the resources to run as the president of Nigeria with 36 states and Abuja the capital, Bakare said, “Joseph (in the Bible) did not contest an election; yet, he became the prime minister of Egypt. Why must I worry myself about where to get the resources for the task? Your own duty in this assignment is to pray along with me. When it is the appointed time, He (God) will do it. When He tells me the time, you will hear about it.”

The cleric also said that most of the “political juggernauts” in the country would fall “at the feet of women in 2018.”

He said, “In 1998, I told you that I saw your President dying between two women. Did it happen? I’m telling you again: some of these political juggernauts will fall at the feet of women and you will see it happen.”

READ ALSO: Nigerians are impatient, they want change faster than is possible —Buhari

Bakare, has now become another Nigeria pastor to claim hearing from God to contest and emerge as Nigerian President.

His counterpart, Chris Okotie, founder of the Household of God Church International Ministries, had on several occasions claimed hearing from God to contest to become Nigeria’s president and has failed in all attempts made so far.

God says Buhari is in a horrible bondage, he either changes or be replaced in 2019 – Fr. Mbaka