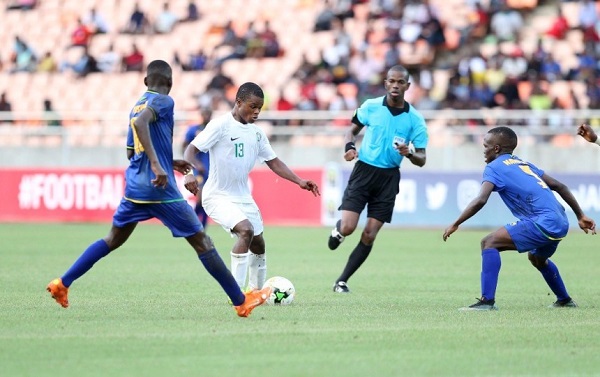 The Golden Eaglets of Nigeria saw off stiff competition from their Angolan counterparts in the ongoing U-17 Cup of Nations taking place in Tanzania to secure their second win in the tournament.

It took a penalty kick converted in the 20th minute of the game by Olakunle Olusegun after an Angolan player handled the ball in the box, to separate both teams as the Eaglets edged past their opponents by a goal to nil.

And just like the first game against hosts Tanzania which saw the team clinch victory by 5 goals to 4, the Eaglets tutored by Manu Garba failed to convert a host of chances created during the game.

Nigeria has now qualified for the semi-finals of the tournament and have most importantly become the first African country to qualify for the U-17 World Youth Championship taking place in Brazil later this year.

Following the 1-0 win over ten men Angola, the Golden Eaglets now look forward to the last game of the first round in the ongoing youth soccer tournament.