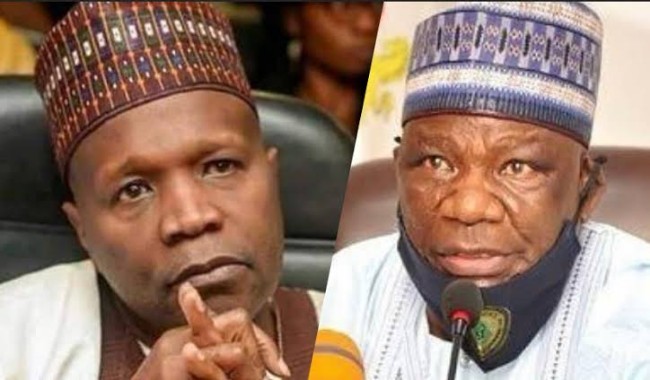 The PDP in Gombe State, on Wednesday, petitioned the Federal High Court in Abuja to prevent Governor Inuwa Yahaya and his deputy, Jatau Daniel, from running in the governorship race in 2023,

The party and its governorship candidate, Muhammad Barde, requested the disqualification in a lawsuit filed by the PDP and two other parties against the INEC and other parties with case number FJC/ABJ/CS/1301/2022.

Two Senior Advocates of Nigeria (SAN) Chief Arthur Okafor and J.J. Usman, filed an Originating Summons on behalf of the plaintiffs, citing a number of Supreme Court rulings in their arguments.

According to the PDP, Yahaya and Jatau submitted FORMS EC-9, and as those forms served as certificates, allegedly making fraudulent statements in them amounted to submitting forgeries.

In the court processes, the plaintiffs alleged that Jatau bears multiple names in his certificates for Certificate of Primary Education (Manassah Jatau).

The Plaintiffs further claimed that Yahaya submitted Form EC-9 in 2022. (Affidavit of Personal particulars of Person seeking election into the office of governor of Gombe state).

According to the plaintiffs, Yahaya claimed in the form that he worked for A.Y.U & Co. Ltd. between 1985 and 2003 and the Bauchi State Investment Company Ltd. in 1984, contrary to what he claimed in his deposition in 2018 that he did.

“That Yahaya in 2018 while presenting his personal particulars to INEC to participate in the Gombe state governorship election, stated in his INEC FORM CF001 that he worked with A.Y.U & Co. Ltd. from 1980 to 1990.

According to the plaintiffs, Yahaya’s deputy attached his Certificate of National Youth Service Corps dated July 31, 1980, which stated thus:

The PDP argued that FORM EC-9 being an affidavit on oath, both Yahaya and his deputy, made false statements therein, had committed forgery, and therefore not qualified to contest the state election.

No date has been fixed for a hearing in the suit.