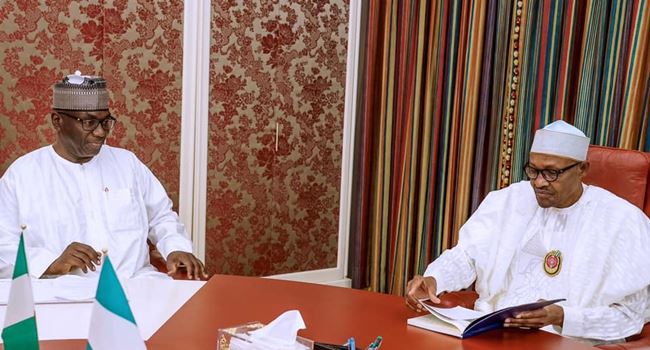 Governor Abdulrahman Abdulrazaq of Kwara State, on Monday, met with President Muhammadu Buhari at the Presidential Villa, Abuja, to brief him on the developmental challenges he inherited in the state.

The governor, according to a statement by his Chief Press Secretary, Rafiu Ajakaye, also briefed the President on the steps he has taken so far to address the situation.

Ajakaiye further revealed that the purpose of the meeting with Buhari was to keep him abreast of the situation he met on the ground, especially infrastructural deficits in the areas of water, roads, education, health, and agriculture,.

“The governor also told Mr President how he had been tackling challenges such as gradually restoring water in the state capital and other parts of the state,” Ajakaiye said.

The statement further revealed that Abdulrazag briefed the President about about the payment of various counterpart funds in the health sector, and how he had returned UNICEF to the state after many years and also how the payment of N450 million restored the relationship between the state and UBEC, which had blacklisted the state before.

According to Ajakaiye, President Buhari commended the governor for his efforts at repositioning the state, and promised to look into his requests for the development of Kwara and the nation as a whole.