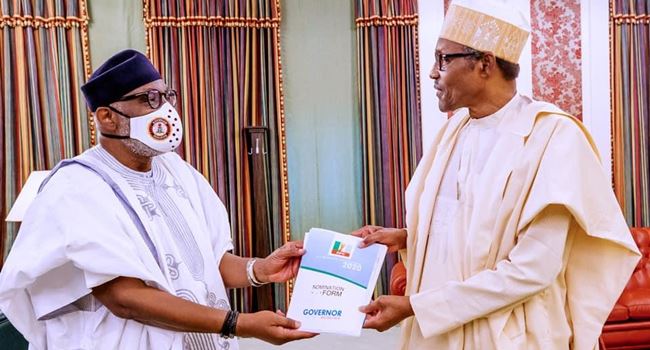 The governor is believed to have visited Buhari to inform him of his intention to seek a second term in office as the Ondo State governor on the platform of the governing All Progressives Congress (APC).

This was especially as the governor presented his Expression of Interest forms to the President during their meeting.

He told State House correspondents after the meeting that he was sure of winning the APC ticket and emerging victorious in the governorship election slated to hold in October.

He also said that he was prepared for any mode of primary APC would adopt in the state, be it direct or indirect.

Edo State Governor Godwin Obaseki had also recently visited Buhari and presented him with his Expression of Interest form.

The governor, however, was later disqualified by the party for its primary election in Edo State.

Obaseki, earlier this Tuesday dumped APC after meeting with Buhari again and may be defecting to the opposition Peoples Democratic Party (PDP) anytime soon.