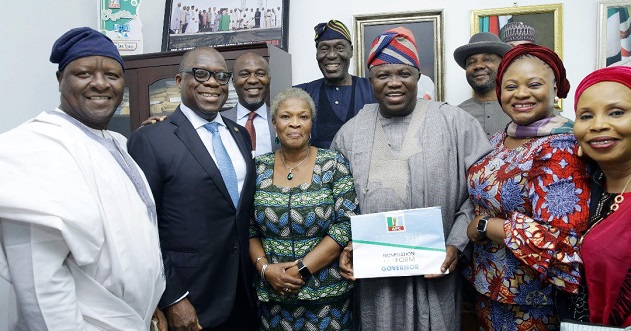 Governor Akinwunmi Ambode may just be on his way out of the Lagos Government House, come 2019, if feelers emanating from the Lagos State chapter of the All Progressives Congress (APC) are anything to go by.

Ahead of the party’s primaries, there are indications that the party’s leadership in the state is unhappy with the governor, and may just be scheming to see him out of office,

So far, three aspirants have purchased the party’s governorship nomination forms in efforts to emerge as the APC governorship candidate for the 2015 election. They are Ambode, Dr Femi Hamzat and Hon. Jide Sanwoolu.

Already it is being speculated that Sanwoolu is the preferred candidate of the party’s leadership in the state.

Read also: Politically, Atiku is my junior, I can’t step down for him –Lamido

Already, reports say about 57 local government chairmen in the state have expressed a lack of confidence in Ambode and have moved to withdraw their support from him, and give same to the choice of the leadership.

A video purported to be the chairmen as a meeting where the decision was taken has gone viral on social media.

There have been rumours in the last few weeks that the governor had fallen out of favour with his political godfather, and former governor of the state, Asiwaju Bola Tinubu.