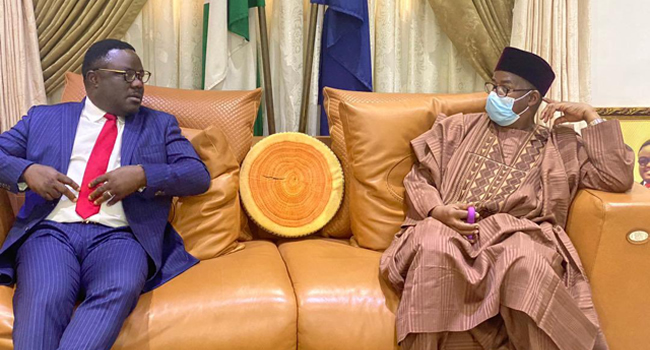 The Governor of Cross River State, Ben Ayade, has sent a strong warning to the Peoples Democratic Party (PDP), threatening that he stands on the fence and ready to dump the party if not accorded his due respect and recognition.

Speaking in Calabar, on Friday during a visit by the Governor of Bauchi State, Bala Mohammed, Ayade said it was time for him to put down his foot and take a decision on the bases of what would prosper the collective well-being of the people of Cross River.

He maintained that because he played politics with ethics, his style was being mistaken for weakness.

Addressing Mohammed, Ayade said: “I cannot blind myself to the challenges of PDP and decide not to know what to do at the right time for their [Cross River people] sake. I know you are somebody that doesn’t take injustice. One single injustice they will see a new Cross River state.

“And I say it as a warning because it does appears that your party seems to celebrate people who threaten and stress them.

However, he assured Mohammed that where ever he goes he would follow him because they both have the same cause of direction for the people.

“I am happy you have created an opportunity for a melodrama. So today I am seated and dancing on the fence. Indeed that’s true. And so I speak with righteous anger for the continuous annoyance and nuisance orchestrated on our innocence by external factors. But I just hope this ends today.

“So please as I leave you with some holy whispers, which will be very strong, firm and clear, it’s a harbinger of trouble. While I believe in ecclesiastics of peace, I believe in the catechism of good faith but I also believe in respect for the supremacy of an office,” Ayade added.