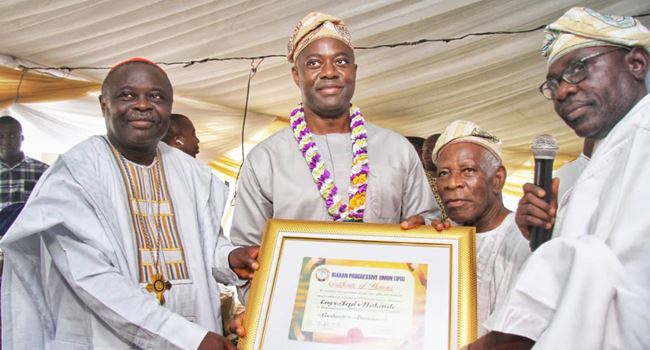 The governor of Oyo, Seyi Makinde, has assured the people of the state of more good governance.

He spoke after the Olubadan of Ibadanland, Oba Saliu Adetunji, announced the conferment of a traditional title of Aare Jagunmolu of Ibadanland on him.

The monarch made the pronouncement when he spoke at the investiture of Governor Makinde as a Distinguished Member of the Ibadan Progressives Union (IPU) during a reception held at the Government House, Ibadan, at the weekend.

Oba Adetunji said that the formal installation of the governor would take place at a later date.

Responding, the governor said his government since coming to power in May had executed some landmark projects without accessing any borrowed funds.

“We are also focusing on security and expansion of our economy through agriculture and Agric value chain. We know that it is through agribusiness that our teeming youths can get jobs and I am pleased to announce that African Development Bank (AfDB) has agreed to include Oyo State in the Agro-processing zone and that will get the needed support.

“The civil servants are here and I make bold to tell you all that we have not accessed one Kobo of borrowed money on the things we have done in Oyo State up till this moment.

“Now, on the issue of sustainability, I am an Engineer and if you see an Engineer digging a hole in front of your house, he already knows how the structure he will build on it would look like. So, we will sustain the tempo.

“When we got into office six months ago, we outlined a few things we needed to do. One of them is to ensure that the economy of Oyo State, is increased with, at least, N8 billion. We thought of how to achieve this even when we need to pay salaries of workers every 25th. When we started, some were saying we can’t sustain that policy action but this is the sixth month we have fulfilled the obligation without borrowing a dime.

“People will always say that power gets into the head of politicians when they get into office. For example, if you want a 10 power-horse engine to tow a car, you can move from 0-100 km/hour within three to four seconds, but if you get to a point where you are supposed to apply brake and you are unable to, you will lose control.

“So, power without control is nothing. In fact, it is dysfunctional. The people of Oyo State have given me the power but I will apply all the control. Here, we are just starting; you have not seen anything yet,” he said.