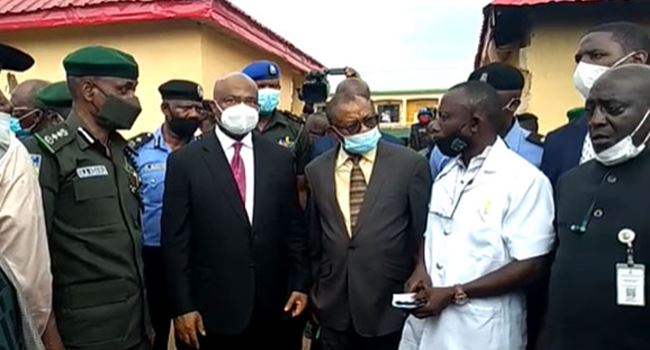 The governor of Imo State, Senator Hope Uzodimma has promised to rebuild and rehabilitate police stations damaged by hoodlums in the state during the EndSARS protests crisis.

Imo was among states in Nigeria where police stations were burnt and destroyed by rampaging youths after the EndSARS peaceful protest turned violent following the shooting of the protesters in Lekki, Lagos State supposedly by soldiers.

Speaking on Thursday during the Security Summit held in Owerri, the state capital, Uzodimma condemned the destruction of police stations and assured his government would fix them.

He said Nigerians had the right to protest peacefully but that in an event a protest “protracts and graduated to disturbance of public peace and chaos” it would no longer be accepted.

The governor pleaded with police in the state to return to duty to ensure the security of the state, adding that his administration would always support all security agencies in the state.

The Inspector General of Police (IGP), Mohammed Adamu, who was in the state for on the spot assessment of the level of damage to police formations and other properties, attended the event.

The IGP equally visited traditional rulers and other stakeholders.

He said it was necessary for Nigerians to accept community policing, which he said remained the best strategy to combat crime in the country.