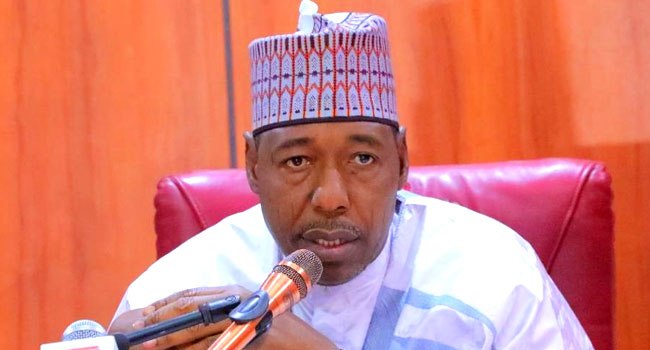 The Borno State Governor, Babagana Zulum, on Friday identified poverty as the direct cause of Boko Haram insurgency in the North-East.

Zulum, who stated this during a meeting with members of the Barewa Old Boys’ Association (BOBA) at the Government House in Maiduguri, insisted that there were direct links between poverty, criminality, and the insurgency.

The National Bureau of Statistics (NBS) had on November 17 said at least 133 million Nigerians are suffering from multidimensional poverty.

Zulum, however, said a good leadership was a panacea to the Boko Haram insurgency.

Hundreds of thousands had been killed and over two million others displaced in the Boko Haram insurgency which started in Borno State in 2009.

The governor said: “For we the leaders, there is the need to do the needful, create the enabling environment for people to find their means of livelihood. The nexus between peace, security, and development should not be over-emphasized, if there is no peace, no development.

“The constitution of the Federal Republic of Nigeria has clearly spelt out that security is under the control of the Federal Government but that does not mean that the state governments are not important, but they also played a critical role in the situation within the state.

“Once there is no good leadership, nothing can be achieved. As leaders, we need to ensure discipline and accountability and above all monitoring and evaluation.”

Why Nigeria must shift focus from consumption to production – Osinbajo