Governors to meet on looting of COVID-19 palliatives, others Wednesday | Ripples Nigeria 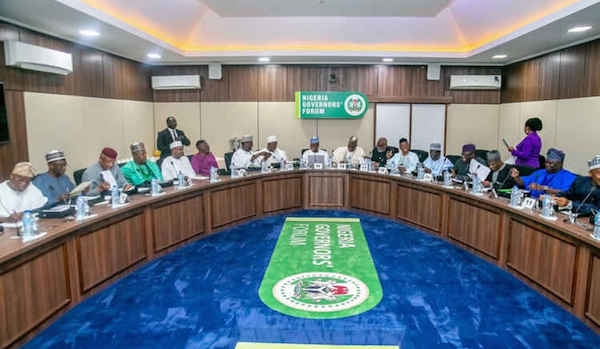 The governors of the 36 states in the country will meet on Wednesday to review the internal security situation in Nigeria and the status of the disbanded Special Anti-Robbery Squad (SARS) whose activities led to the recent protests in the country.

The Head of Media and Public Affairs, Nigeria Governors’ Forum (NGF), Mr. Abdulrazaque Bello-Barkindo, who disclosed this in a statement on Tuesday in Abuja, said the forum’s 21st teleconference would start by 2:00 p.m. on Wednesday.

Bello-Barkindo said the governors would also discuss the launch and distribution of the COVID-19 palliatives donated to state governments by a private-sector group, the Coalition Against COVID-19 (CACOVID).

According to him, the forum will also look at the subsequent indiscriminate looting of various warehouses throughout the country during the violence that trailed the #EndSARS protest.

He said: “As usual, the Chairman of the Forum and Governor of Ekiti State, Dr. Kayode Fayemi, will remark on the most contemporary issues affecting the country since the last teleconference.

“In this regard, the Ekiti State governor will be addressing his colleagues on several issues including feedback from the Presidential Villa on the Universal Basic Education Commission (UBEC) counterpart funding as schools are beginning to reopen nationwide.”

The NGF spokesman added that Fayemi would also address the governors on the 50th anniversary of AREWA which took place in Kaduna over the weekend.

Bello-Barkindo added: “The governors will also deliberate on the HORASIS meeting with president, an international think-tank group and investment promoter, which is a partnership between the NGF and HORASIS, a management consultants’ consortium.

“The meeting is also expected to set up a strong Foreign Direct Investment (FDI) initiative for the country, a webinar on privatisation to be jointly driven by the Nigerian Stock Exchange, NGF, and the Nigeria Investment Promotion Commission among others.

“There will also be a presentation on the Digital Curriculum Initiative for Basic and secondary Education ingeniously tagged e-Gamma Solutions Limited during the teleconference.

There will also be updates on the States Fiscal Transparency, Accountability and Sustainability programme as well as from the Governor Ifeanyi Okowa Committee which liaises between the Presidential Task Force on COVID-19 and the NGF.”