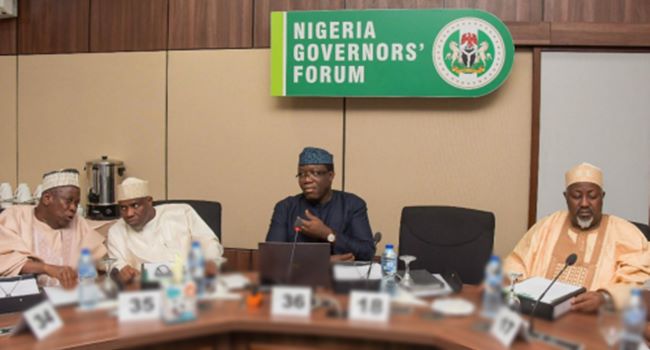 The governors of the 36 states of the federation are seeking a reassessment of the payment process of the N614 billion budget support facility, granted to them by the Federal Government through the Central Bank of Nigeria (CBN) in 2017.

The decision was reached Wednesday night in Abuja ahead of Thursday’s National Economic Council meeting, held at the Presidential Villa.

“On budget support facilities specifically, states are already honouring their obligations. They are already paying back what is lent to the federal government.

“The question of the amount is something that we will continue to review. It is our view that we should be paying a lot less what we are paying but that is something that has not been addressed yet. But that has not stopped us from honouring the obligation to the federal government that lend the resources to us at the time that they did.”

The FG had last September began the deduction of the repayment of the facility, availed at 9 per cent interest rate, with a two-year grace period to 35 states.

It was granted to them to enable the states meet their financial obligations to civil servants and pensioners.

Zainab Ahmed, the Finance Minister, speaking few weeks before the deduction began, said repayment would be deducted from the affected states’ allocations and should not be regarded as revenue to be used for funding the 2020 budget.

She clarified that the money was a loan granted by the Central Bank of Nigeria (CBN), saying the recovery process was to be deducted from the Federation Accounts Allocation Committee ((FAAC) allocations of the states and remitted to the CBN.