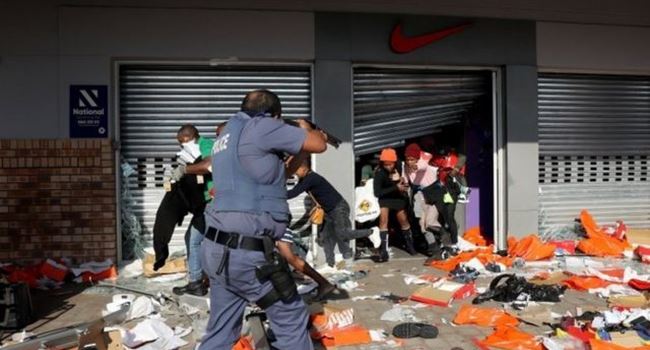 Rioting triggered by the imprisonment of former South African President, Jacob Zuma, has claimed 10 lives as violence escalated on Monday, with shopping malls in Johannesburg looted and many businesses set ablaze.

The government has deployed military personnel to the streets as the riots escalated.

The protests which began on Friday by Zuma’s supporters in his home region of KwaZulu-Natal province, has spread to other provinces, and 219 rioters have so far been arrested.

According to the police, “shops and businesses have been looted and vandalised and burning vehicles and debris left across roads.”

The violence was activated after Zuma began serving a 15-month sentence for contempt of court.

The 79-year-old had defied a court order to testify before a state-backed inquiry probing allegations of corruption during his term as president from 2009 to 2018.

A police spokesman who spoke to the media on the protests said:

“The police have been involved in running skirmishes with residents, protesters and criminal elements, who have basically gone through the central business district and ransacked it. They are greatly outnumbered by the people.

“They invaded a shopping mall in Johannesburg and everything was stripped from its premises, including cash machines and anything of value.

“We have seen three days of protesting, of rioting, of general lawlessness in some of the biggest cities in South Africa.

“What the police have been trying to do is restore a sense of order in the central business district, but they are completely overwhelmed,” he said.