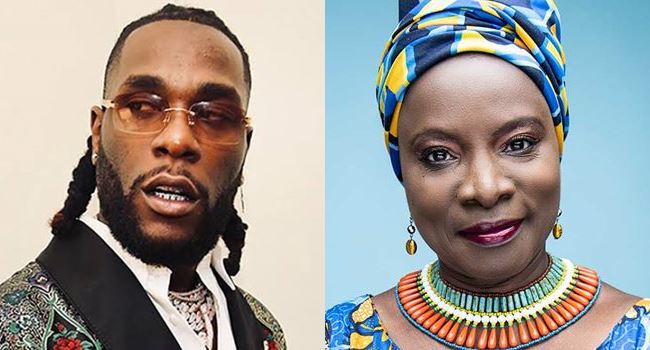 Scores of Nigerian music fans rooting for Burna Boy to emerge winner in the Best World Music Album category at the 2020 Grammy Awards were left disappointed when the ‘Ye’ crooner lost out to legendary musician, Angelique Kidjo.

The Benin Republic singer won the coveted award with her album titled ‘Celia’ ahead of Burna Boy, Nathalie Joachim, Altin Gun and Bokante.

The feat by Angelique Kidjo also marks the fourth time she is carting home the prestigious award.

And in a show of solidarity, Angelique Kidjo in her powerful acceptance speech dedicated the award she won to Burna Boy as one of the few emerging African superstars taking the world by storm.

Recall that Burna Boy had raised the expectations of his fans when he gave a hint that he may emerge winner of the award following his post on Twitter.

The music star took to his Twitter page on Friday, January 24, 2020, where he posted a tweet which kind of gave away the notion that he was on course to win the Grammy for the category he was nominated for.

“Can you keep a secret?” Burna Boy tweeted ahead of the Grammy music award.

But it turned out not to be as Burna Boy will now shift his attention to the 2020 BRIT Awards where he has been nominated alongside other foreign acts like Americans Bruce Springsteen, Dermot Kennedy, Tyler The Creator and Post Malone, in the Best International Male artist category.

The BRIT Awards set for February 18, 2020, will be hosted by Jack Whitehall for the third year running and will be the 40th edition of the British Phonographic Industry’s annual pop music awards.