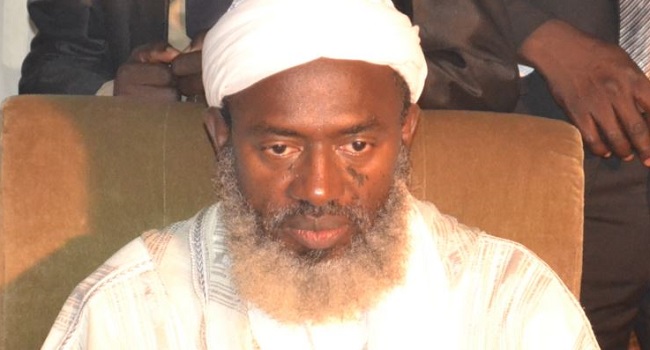 A civil society group under the aegies of Coalition for Peace In Nigeria (COPIN), has called on the Department of State Services (DSS), to immediately arrest controversial Islamic cleric, Sheikh Ahmad Gumi over his alleged romance with bandits and terrorists.

The group, at a press conference held in Abuja on Wednesday, said the arrest of the Kaduna-based scholar was long overdue owing to his fraternity with the bandits and his persistent call on the Federal Government to grant them amnesty and compensation.

The COPIN added that by now, the DSS should have made him a person of interest and have him answer questions just like his spokesman and publisher of Desert Herald, Tukur Mamu.

In a communiqué at the end of the parley signed by COPIN’s National Coordinator and Secretary-General, Emeka Akwuobi and Hajiya Fatih Yakub, respectively, the civil society group said that Sheikh Gumi had a lot of explanations to offer on the activities of bandits, especially those operating within the North West area.

“COPIN insists on the immediate arrest, interrogation and prosecution of Islamic scholar, Sheikh Ahmad Gumi over his alleged fraternity and involvement with bandits and terrorists.

“While COPIN commends the DSS on the professional manner it has handled the arrest of an acclaimed kidnapped Abuja/Kaduna train passengers’ negotiator, Tukur Mamu, we also urge the Service to make Gumi a person of interest and immediately arrest him.

“We have watched with keen interest the provocative tendencies of Sheikh Gumi, especially as they relate to the activities of bandits/terrorists operating within the North West general area.

“Consequently, COPIN demands the immediate arrest and interrogation of Sheikh Gumi who should be a person of interest to all intelligence and law enforcement agencies,” the communiqué said.

Related Topics:BanditsSheikh Gumi
Up Next