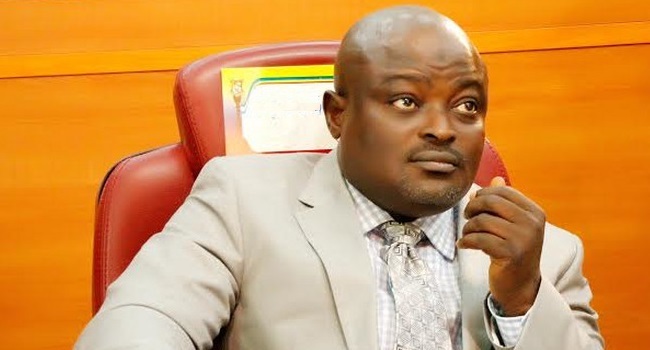 A human rights group in Lagos has called on the Speaker of the Lagos State House of Assembly, Mudashiru Obasa to resign over allegations of corruption levelled against him.

The group, SecureWorld and Liberty Initiative For Peace (SECUREWORLD) called on the Lagos House of Assembly to commence an immediate open/public investigation of the mind-boggling corruption allegations, with heavy documentary evidence, being made against the speaker in recent times.

In a press release on Thursday, issued by the organisation’s executive chairman, Comrade Mark Adebayo, who is also the national coordinator of Explain Yourself Coalition, SecureWorld maintained that:

“There are clear paths of honour for the institution of the state’s assembly and the person of the speaker to tread in this whole dishonorable scandal that’s been disturbing the political space of Lagos State for weeks now.

“First, the speaker has to step down immediately (and that is long overdue) for the House to impartially investigate these humongous corruption allegations that have been in the public domain in recent times.

“We find utterly reprehensible the nonchalant reaction of the Lagos State Assembly and the trivialisation of the shameful incident by the person being alleged.

“These are the elementary procedures and world’s best practices that ordinarily should be a natural course of action but which has become so difficult in Nigeria because of the support mechanisms that the rotten system avails corrupt public officials who take full advantage of the many loopholes in the anti-corruption laws and our moribund political structures.”

The group further said, “At this juncture, bearing in mind of the overwhelming series of documents to back the corruption allegations against the Speaker, he must either immediately resign his position of speaker or, at least, step down from office pending the outcomes of the investigations.

“Considering the mountainous corruption allegations against Hon. Obasa, he has lost the moral credentials to continue presiding over such an important democratic lawmaking institution as a state’s legislature.

“As an organisation working together with other anti-corruption stakeholders, we shall take appropriate actions within the limits of the law, including mass protests and court actions in due course if our demands for the Speaker to step down and investigations commenced against him are not met within a reasonable timeframe.”