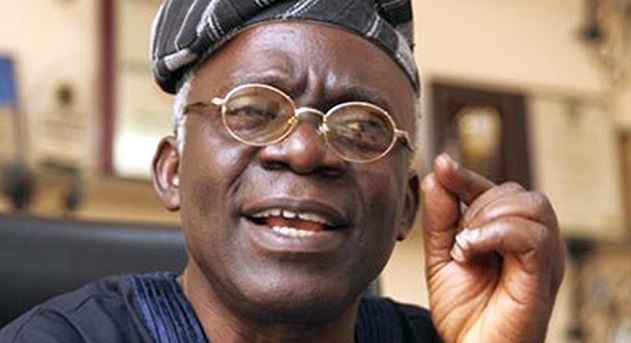 Human rights lawyer, Femi Falana (SAN) has been dragged to court by a coalition of Civil Society (CSOs) under the umbrella of Coalition for Justice, for allegedly instigating the #EndSARS protests against police brutality and bad governance which was later hijacked by hoodlums.

The convener of the CSOs, Gabriel Ogboji esq, in a statement issued on Friday in Abuja said that it cannot stand by and watch indifferently as Falana presses on with his quest to institute mob rule in Nigeria after serially failing to get himself into government through different ploys.

Igboji further added in the statement that they have therefore resolved to launch a judicial challenge against Falana as they are concerned that he is rehearsing a prelude to anarchy.

The group also suggested that until the legal case constituted against him is concluded, Falana should lend himself to democratic processes and perish the idea of using mob action to sack a legitimately elected government.

The statement by the group reads thus in full; “We are concerned that Falana is rehearsing a prelude to anarchy, especially when insiders from ASCAB have bragged that the “Citizens’ panel” is designed to be their own equivalent of the Revolutionary Tribunal (Tribunal Révolutionnaire or unofficially Popular Tribunal) during the French Revolution, which ended up being one of the world’s most powerful engines of the Reign of Terror.

“The Coalition for Justice cannot in good conscience stand by and watch indifferently as Falana presses on with his quest to institute mob rule in Nigeria after serially failing to get himself into government through different ploys.

“The terms of reference that Falana’s ASCAB has arrogated to itself in constituting the “citizens’ panel” to investigate the #EndSARS Protests directly usurps the powers so vested in the states of the Federal Republic of Nigeria to set up Judicial Panels of Inquiry. Falana, his group – ASCAB and those he is fronting for have practically created a parallel government.

“Arising from this development, the Coalition for Justice observed that these recent activities of the group led by Falana are illegal and a threat to the safety and security of Nigerians. We have therefore resolved to launch a judicial challenge against the legality of the parallel citizens’ court at a time that the Nigerian constitution is being effectively implemented by the statutory entities.

“We are taking this step of dragging Falana with his ASCAB to court because his dalliance with separatists and terrorist groups is well documented in the briefs he holds for elements of the Islamic Movement in Nigeria (IMN) and Indigenous People of Biafra (IPOB), two organizations that have been either outlawed or declared as terrorist entities, but which Falana has been vehemently defending. Both organizations have in the past unveiled their military wings, which implies that Falana is basically fronting the “citizens’ panel” as their judiciary, ones that would be used to decimate his perceived political enemies and all the constitutional institutions that stand in his way.

READ ALSO: Since the rich are united in exploiting our resources, the poor must unite to free themselves from poverty —Falana

“We see this approach as a ploy by organizations like Amnesty International and Falana’s other sponsors to destabilize Nigeria, which we will never allow. Not even the slush fund totaling $2 million that Falana and his co-travelers have reportedly collected for this nefarious assignment will scare us into allowing them to carry out their threat to constitute the so called “citizens’ tribunals” on human rights abuses by security agencies.

“Coalition for Justice is of the view that Falana’s actions are illegal, null and void, a conviction that we shall establish in court. Hiding behind the banner of fighting human rights activism is not a license to abuse the constitution. Until the legal case we will institute against him is concluded, we suggest that Falana lends himself to democratic processes and perishes the idea of using mob action to sack a legitimately elected government.

“We are a coalition of more than 20 Civil Society Organizations (CSOs) that have come together for the sole objective of intervening in the emerging impediments to Nigeria’s democratic sojourn, which now constitute a threat to the corporate integrity of Nigeria. We operate under the umbrella name of Coalition for Justice.

“Let us make it clear that in the past few weeks we have taken time as individual CSOs to keep track of and monitor developments within the polity. Alarmed by what was observed to be a prevailing trend, we held an emergency meeting in Abuja on Wednesday December 16, 2020 during which we coalesced our findings and reviewed these among ourselves,” the statement concluded.

Ebonyi restricts religious worships to two hours due to covid-19