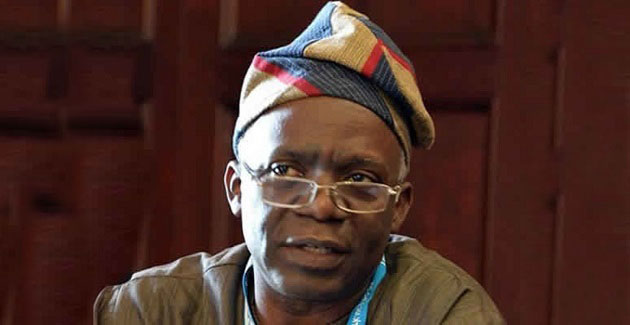 A civil society group under the aegis of Make Nigeria Better Initiative (MNBI), has filed a criminal complaint against human rights lawyer, Femi Falana, SAN, before the International Criminal Court in the Hague.

He is accused of allegedly instigating the violent #EndSARS protests that led to “killing of innocent citizens, wanton destruction of properties and other heinous crimes against humanity in Nigeria.”

In acknowledging receipt of the proceedings, the ICC, in a reply signed by the Head of Information and Evidence Unit of the ICC, Mark P. Dillon, said communication has been entered by the Registry of the Court and will be considered accordingly with the procedure and Rome Statute of the ICC.

In the complaint dated 4th November, 2020, and addressed to the office of Madame Fatou Bensouda, the Prosecutor of the ICC, the groups lawyer, Joseph Nwaegbu, a Senior Associate of Pathfind Attorneys, said the role played by Falana before, during and after the protests was not only ignoble but criminal.

”On the recent #EndSARS protests which turned violent across the country, we beg to submit that the role played by Mr. Femi Falana, SAN, before, during and after what observers described as “the mother of all protests in Nigeria,” is not only ignoble but criminal,” the group said.

The MNBI further accused the Lagos lawyer of spreading fake news to further incite the youths in the country against the government which led to the killings and destructions of properties.

”We have seen how the type of incitement spearheaded by Mr. Falana worked in Rwanda and other parts of the world and the resultant effect was genocide. In the case of Nigeria, the misguided youths who acted based on Falana’s posture, character and utterances employed crude methods to illegally murder about 22 police officers in cold blood during the #EndSARS protests that lasted between the 3rd October, 2020, and 21st October, 2020.

“We strongly believe that Mr. Falana is a highly placed Nigerian citizen, senior lawyer and politician, that without the timely intervention of the ICC, he will get away with justice in this case.

”At Oyigbo Police Station in Lagos alone, a total of three police officers were killed and roasted like Christmas goats with their facilities destroyed,” the group added.

The group said it attached sensitive pieces of evidence on the allegations raised to drive home their argument that Falana ought to be prosecuted and sanctioned.

In the criminal complaint, the complainant listed policemen killed and government property destroyed as casualties of the protest which lasted for about three weeks.

”Despite the killing of innocent citizens and security agents alike with reckless abandon in the aftermath of the #EndSARS protest, MNBI believes that it is rather reprehensible, appalling and criminal for Falana to keep publishing on some online platforms from 25th October, 2020, till this moment, with the aim of trivializing the damage caused to innocent citizens in Nigeria.

“We submit that this again should form a basis why he is liable for investigation and subsequent punishment by this Honourable Court being the last hope of common men worldwide.

”It is our further submission that what Falana is doing gives room for suspicion that another brand of terrorist group may be created to hide under the cover of human rights activists whilst sustaining the evils already bedeviling our people through the activities of the disbanded Islamic Movement in Nigeria (IMN), Boko Haram and Indigenous People of Biafra (IPOB).

”Overall, we submit that prima facie cases of instigating violent protests that led to the killing of innocent citizens, wanton destruction of properties and other heinous crimes against humanity have been established against Femi Falana vide this criminal complaint for which the ICC can investigate, prosecute and mete out appropriate sanctions to him.”

The group called on the ICC prosecutor to open an investigation of Falana, under Article 15 (1) of the Rome Statute.

The MNBI called on the ICC prosecutor to compel Falana, upon conviction under the Rome Statute, to pay the sum of $2 billion as punitive damages for causing death, injury and maiming of several citizens as well as wanton destruction of public and private properties.