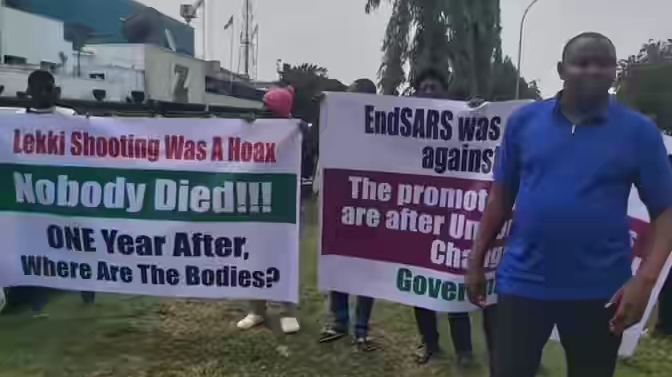 As the #endSARS memorial protests raged across the country, a group of pro-Buhari protesters in Abuja slammed reports about the massacre at Lekki Toll Gate in 2020.

A report by BBC Pidgin on Wednesday captured the group on video at its meeting point at the Unity Fountain in Abuja, after the #endSARS protesters had left the venue.

The protesters who were conveyed to the venue by a bus held up placards stating, ”#EndSarsProtest; Lekki shooting was a hoax”, and ”Nobody died at Lekki tollgate”.

One of the organisers of the group, named Justice Vanguard, told the BBC Pidgin that nobody died during the 2020 #EndSARS protests in Lekki.

He said, “We found out that some miscreants peddled lies which is why we are here to protest against it; they claimed that there was a massacre.

“Where are their bodies; we are here to put those lies to rest? There was no massacre and nobody was killed. Let there be incontrovertible evidence. We will resist any group attempting to destabilise the country. We won’t allow foreign interest groups destabilise Nigeria.”

On the reason for their small number—with the group comprising around 15 persons, the organiser rejected claims of being sponsored by the Federal Government.

“We are not sponsored, unlike the other people who are hired thugs which is why we are here in our small numbers. Nigeria will succeed irrespective of evil machinations in the form of Boko Haram and bandits.

“The truth must be established; the #EndSARS protest ought to have been stopped immediately after the former IGP dissolved the unit. The protesters ought to give the FG time to implement the five-point demands but they went after regime change because they are sponsored by foreign elements,” he noted.

US consulate trains 50 teachers in Lagos