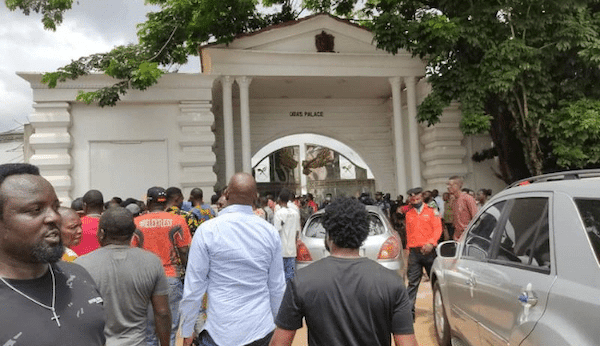 Supporters of Edo State governor, Godwin Obaseki and his All Progressives Congress (APC) challenger, Pastor Osagie Ize-Iyamu, clashed around the Palace of the Oba of Benin on Saturday.

Trouble started when Obaseki visited the Edo monarch on his way to the Samuel Ogbemudia Stadium venue of the PDP campaign rally and some supporters of the APC candidate chanted songs that were considered offensive against the governor and his team.

The Peoples Democratic Party (PDP) team left the Oba’s palace a few minutes later and headed for the venue of the campaign rally.

One hour after the governor left the palace, Ize-Iyamu and his entourage also paid a visit to the monarch.

However, in what appeared to be a reprisal, the PDP youths who were at the stadium for their party’s campaign rally found their way to the palace and engaged the APC supporters in a free for all.

The two groups engaged in a gun duel and several people from both sides sustained serious injuries.