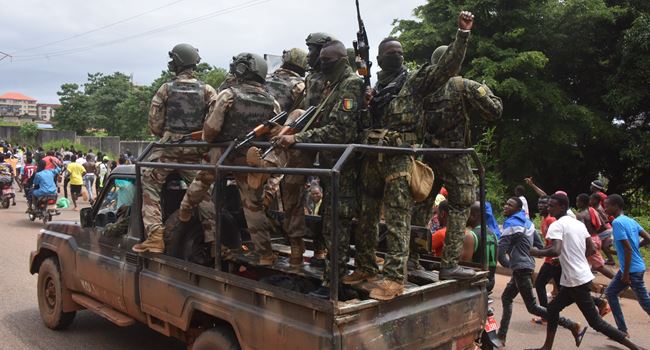 Thousands of Guineans have taken to the streets of the capital Conakry on Monday, to celebrate with members of West African country’s armed forces after they staged a coup d’etat that toppled long term President Alpha Conde.

The coup plotters, led by former head of the Special Forces, Colonel Mamadi Doumbouya, had announced on state television on Sunday that Conde had been arrested while the government and constitution were dissolved.

The country’s borders were closed and its constitution declared invalid in the announcement read by Doumbouya who said:

“The personalization of political life is over. We will no longer entrust politics to one man, we will entrust it to the people

“The duty of a soldier is to save the country.”

A video had emerged showing the 83-year-old Conde, looking tired and dishevelled, in military custody.

Conde, in power for more than a decade, had seen his popularity plummet since he sought a third term last year, saying term limits did not apply to him.

Following the ousting of Condé who pushed through a constitutional referendum in Guinea on March 22, 2020, that would give him a third term after more than 10 years in office, Guineans trooped into the streets to celebrate with the soldiers.