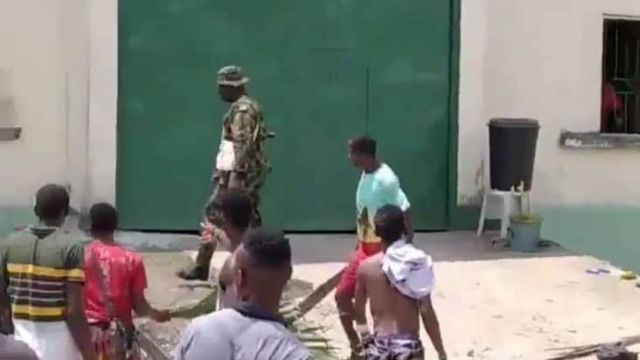 Hundreds of prisoners at the Medium Federal Correctional Centre in Kabba, Kabba/Bunu Local Government Area of Kogi State, have escaped, after heavily armed gunmen attacked the facility, killing some soldiers who were on guard duty.

According to a security officer who confided in Ripples Nigeria, the gunmen who were more than 20, attacked the centre located along the Kabba-Lokoka highway Monday morning, and were able to break into the prison and free the prisoners.

The gunmen, thereafter, launched attacks on the prison officers, injuring some of them, before setting it on fire.

Their escape, according to the security personnel, was aided by the early morning downpour in the town.

Also confirming the incident, the Assistant Inspector General of Police Zone 8, Ayuba Edeh, said efforts are being made to track down the attackers.

He however added that some of the inmates who fled have been rearrested, while a massive manhunt has been mounted for the remaining escapees.