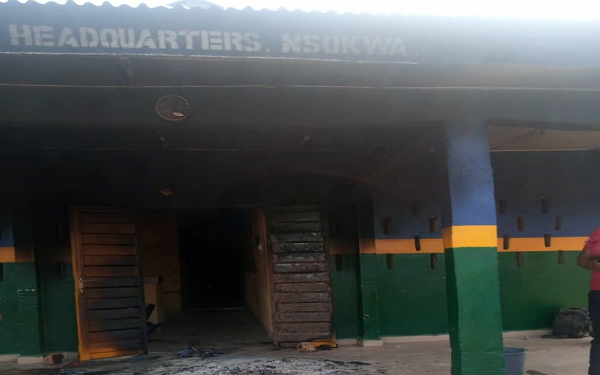 Unidentified gunmen have killed a Police Inspector attached to the Orsu Police Station in Imo State during a gun battle between the police and the invaders on Thursday night.

The heavily armed gunmen who reportedly stormed the police station around 10.35pm, threw explosives and petrol bombs on the roofs of the police station, causing a fire outbreak which damaged vehicles parked in the station.

The State Police spokesman, CSP Michael Abattam, who confirmed the attack in a statement made available to Ripples Nigeria on Friday, said three of the bandits were also killed in the crossfire.

“The Command’s tactical teams on ground engaged the bandits in a gun duel. And due to the superior firepower of the police, the bandits were subdued.

“Three of the bandits were neutralised and their guns, one pump action gun, and two locally-made double barrel pistols were recovered while others escaped into the bush with bullet wounds. Unfortunately, a police inspector lost his life in the attack.”

In the statement, Abattam appealed to Orsu community to assist the police with credible information that will lead to the arrest of the escaped bandits and to report any person seen with or treating bullet wounds.

He also advised hospitals in the area to report any person who comes to them for treatment of bullet wounds with immediate effect.