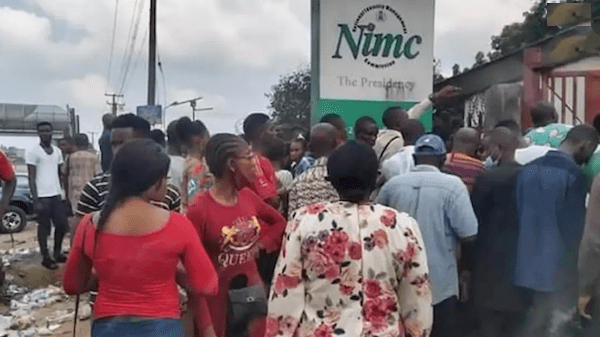 Eyewitnesses told journalists that the seven-man gang wielded dangerous weapons and descended on one of the NIN applicants, collected his mobile phone, and collected monies from others before leaving the premises.

The NIMC Coordinator in the state, Amonia Oghenekaro, confirmed the incident.

He said: “Our lives are in danger.

“I have an appointment with the Commissioner of Police on Thursday. I will ask him to give us some of his men because they said gunmen they will come again.

“Our lives are in danger. We have some policemen here, but they are inside, while the applicants are outside. But we are not even safe inside. So until I meet with the police commissioner.

The coordinator urged the NIN applicants to conduct themselves properly and stick to the dates of their invitation.

The Federal Government had last year ordered Nigerians to link their Subscribers Identification Modules (SIMs) with their NINs.

The exercise which was initially slated to end on December 30 last year was extended by three weeks after the House of Representatives intervened in the matter.